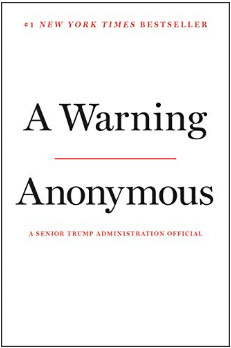 Power always thinks it has a great soul and vast views beyond the comprehension of the weak, and that it is doing God’s service when it is violating all His laws.
—John Quincy Adams

This book was presumably written by a senior Trump administration official, like a cabinet-level appointee, or somebody in a similar situation. The account is not favorable to Trump.

The book tells what it’s like to work inside the White House under Trump as a senior advisor or executive. Trump is shown as a completely unfit person for the presidency. He does not read, he has no interest in opinions other than those of himself, he seeks power and status for himself without regard to what is right for the country or its people. He uses his assistants until they somehow disagree with him, and then they become enemies. All his assistants start disagreeing with him within minutes of any direct interaction. It does not paint a good picture.

Trump promised during the campaign that he would eliminate the national debt within 8 years in office. He has done the opposite. The deficit is higher than ever in history, spending is out of control, higher than Obama’s and that  was one of the main points the conservatives had against Obama. Here is an excerpt that discusses spending:

Donald Trump was not interested in penny-pinching. He may try to project the image of a man working to save taxpayer dollars, and it’s true that he can be talked out of stupid ideas if they cost too much. But that’s not because he’s trying to save money so it can go back to the American people. He still wants to spend the money, just on things in which he’s personally interested, such as bombs or border security. Trump recoils at people who are “cheap.” Today he is sparing no expense on the management of the executive branch, spending so freely it makes the money-burning days of the Trump Organization look like the five-dollar tables at a Vegas casino. As a result, the budget deficit has increased every single year since Donald Trump took office, returning to dangerous levels. The president is on track to spend a trillion dollars above what the government takes in annually.

Here is another excerpt talking about spending and the budget.

Donald Trump has America back on the road to bankruptcy, an area where he has unparalleled expertise for a president of the United States. The small band of fiscal conservatives who remain in the Trump administration warned the president about the eventual dangers of his out-of-control spending addiction. In one such meeting, Trump reportedly said, “Yeah, but I won’t be here.” I never heard him say those words, but it doesn’t come as a surprise. That’s how he thinks. What does he care if the federal government goes belly-up? By then it won’t be his problem.
–Anonymous. A Warning (p. 101). Grand Central Publishing. Kindle Edition.

Trump called the writer a traitor. Trump defenders called him a coward.

Both labels are not fair. Let’s just say the facts stated are true. Clearly, the two excerpts above do not tell us anything we don’t already know. The numbers don’t lie. Trump may not like the fact that someone inside his administration states these facts to the public, but treasonous it is not.

There is obviously no way for a cabinet secretary to write such a book under his or her name and live another hour in the administration, and then not be crucified and smeared for life by Trump supporters in the public and the media. So in order to get this book out, it needed to be written anonymously. Usually I do not like it when writers post anonymous comments in my blog, or anywhere online, but I am making an exception in this case. This book contains valuable information that will help me make my decision when it comes time to vote.

And just because of this, I am going to quote a section at the end of the book that is the most important of the entire message, the Warning. Please read this carefully. If you do not end up  reading the book after this review, at least read this excerpt:

Nevertheless, the counterargument to my point will be strong if the Democratic Party nominates someone deeply out of touch with mainstream America. Then everything changes. If it’s one of the Democratic candidates preaching “socialism,” Trump’s fearmongering will still be persuasive. Republicans will argue that the other candidate, as president, would attack our free-market principles, tax us into economic recession, promote a thought-police culture of political correctness, fan the flames of identity politics, and bring government into our lives like never before. It will be a repeat of 2016. Compared to the leftward-lurching Democratic Party, Trump will seem friendlier to conservative ideals. Discussions about qualifications will give way to emotion and fear, and Trump’s reelection chances will rise.
Democrats reading this book know how high the stakes are. I implore you, if you want a majority of our nation to reject Donald Trump, you must show wisdom and restraint in selecting your party’s nominee. Resist the temptation to swerve away from the mainstream. Trust me. We flirted with extremes in the GOP during the last cycle, and look where it got us. If Democrats do the same, Trump will be that much closer to a second term and better equipped to convince Americans to stick with him. If, however, you nominate someone who campaigns on unity instead of ideological purity, you will have a sizable number of Republicans and independents ready to make common cause.

One thought on “Book Review: A Warning – by Anonymous”