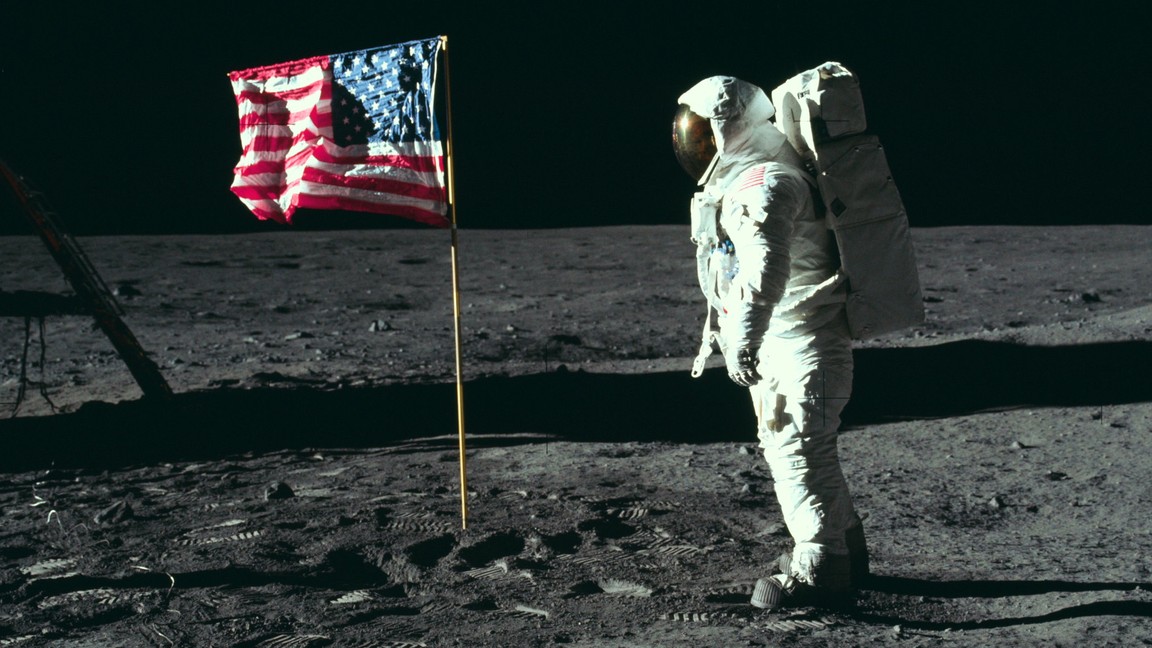 This is one of the most iconic images of the 20th century. It shows Buzz Aldrin on the moon with the American flag on July 20, 1969.

I was 12 years old then, old enough to think on my own and science-minded enough to sit up in the middle of the night (in Germany) in front of our TV at 3:56am local time when Armstrong made that famous first step onto the moon.

The movie Apollo 11 is a documentary of the moon landing, and as we are coming up on the 50th anniversary of this event, it is ever more significant. The entire movie is not narrated or filmed. It is entirely constructed of actual clippings, both video and audio, taken at the time, and put together in a coherent sequence that tells the awesome story in all its glory. There is a minimum of screen prompts, like “Day 3,” that keep the viewer oriented. Other than that, it’s all original material, and that makes the impact all the more powerful.

This is not a movie, but rather a documentary of humanity’s peaceful conquests, and it is told masterfully.

Now that I rated the movie, I have to add my own ruminations about the moon landings.

I am not sure exactly how all those people who were born after this, which is the majority of humanity, think about the moon landings. But I remember clearly reading science fiction in the 1960s when I was in awe of the immensity of the undertaking. I remember a world before humans reached another body.

So a full 89 percent of the world’s population did not have the experience of sitting in front of the television that day, watching those grainy pictures from very far away.

I remember what I thought that day. I remember thinking that by the time I was “old” I’d be able to buy a ticket to take a vacation on the moon. Not in my wildest dreams did I think that by 1972, we’d stop going there, and by 2019, the United States is actually in a position where it does not have the technology to put a man into space, let alone onto the moon. I recognize that we’re on track to change that soon, with initiatives by SpaceX and Boeing for human-rated rockets underway and both within 12 months of realizing that goal.

I would never have thought that a boy in South Africa (Elon Musk) who would not even be born for another two years after the summer of 1969 would be the one that would make it possible for the United States to launch humans into space in 2019, and who would have the vision to take them to the moon and Mars.

The collective will of our nation, and our species, to set goals beyond the next election cycle, has diminished and we are left at the whims of individual politicians with an outlook of a few years at a time. Real goals, like a space program that allows us to leave the planet, are achieved in decades of dedication and lifetimes of focus. Unless we figure that out soon, we might as well continue to ruin our planet and render it unlivable, with no way out.

Perhaps movies like Apollo 11 will inspire us to do more with our time than line our pockets and gratify our immediate urges and needs.