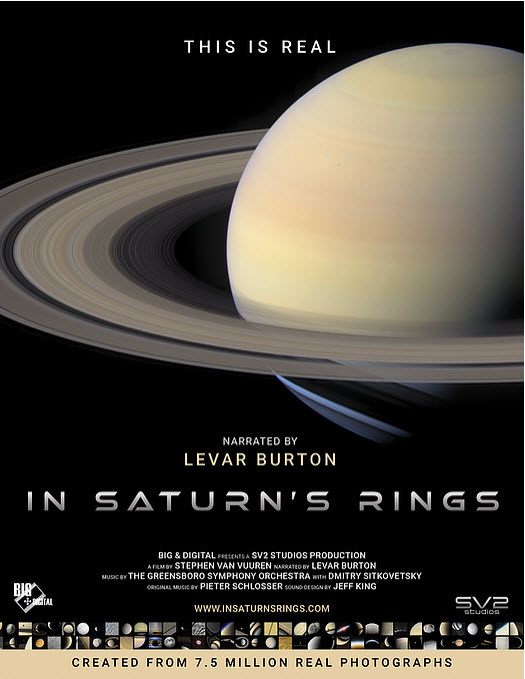 I have waited for In Saturn’s Rings for several years and have followed their Facebook page. It took the producers years longer to finish it than they thought it would. It was supposed to be done on December 31, 2014, but was finally finished on May 4, 2018. It is a 42-minute documentary made exclusively from real photographs taken by spacecraft, from the Hubble Space Telescope to the Cassini-Huygens space craft. The movie uses no computer generated graphics (CGI) technology. All images are arrangements of actual photographs.

There are not many places in the country where the film is currently shown. On my visit to New York City I decided to go out to the New York Hall of Science in Flushing, NY, about 30 minutes outside of Manhattan where it is currently playing.

I have always been fascinated with Saturn and its rings, and I have written plenty about it here. Here is one of my descriptions from almost five years ago where I marvel about floating in the rings and then actually refer to this movie.

But I was disappointed. Perhaps I am spoiled by the amazing CGI production in movies and documentaries where pictures are enhanced and animations are smooth and stunning. In Saturn’s Rings seemed flat and boring in comparison. But again – I realize that there is value in looking at actual photographs, not made-up stuff. And I give the producer credit for that.

However, there is too much fluff in the movie. It starts out with the Big Bang and plays images of Hubble of distant galaxies. Then it moves into an odd collage of photographs of science and scientists, wasting a lot of time on those flying and merging still photographs that didn’t add any value to the message or the film itself. There were fillers, and there were too many of them.

The film is narrated in parts, but some of the descriptions of images were subtitled rather than narrated. I found that annoying. The images were there for a short time, and rather than looking at the images, I found myself reading the captions that described what I was looking at while the narrator was silent. Then the images were gone and the next ones came up. I missed them. This happened a lot.

In Saturn’s Rings is an admirable effort but ultimately not worth it. The images you see in the movie would be much more valuable in a book. Buy a book on the Cassini mission and I am sure you will see the best photographs there. You can read the captions in leisure, and then look at the images as long as you want. In the movie, you only have a few seconds before the next one comes along. Having the image move, or zoom in or out is not adding enough value to account for the brevity of the viewing experience.

As coincidence would have it, I was flipping through the channels yesterday and came across the Science Channel and found Space’s Deepest Secrets – Cassini’s Grand Finale. This was a documentary about the Cassini mission and it showed spectacular graphics of Saturn taken by Cassini but it also provided professional narration and interviews of scientists along with the history of the program. The subject was similar to that of In Saturn’s Rings, but done much better.