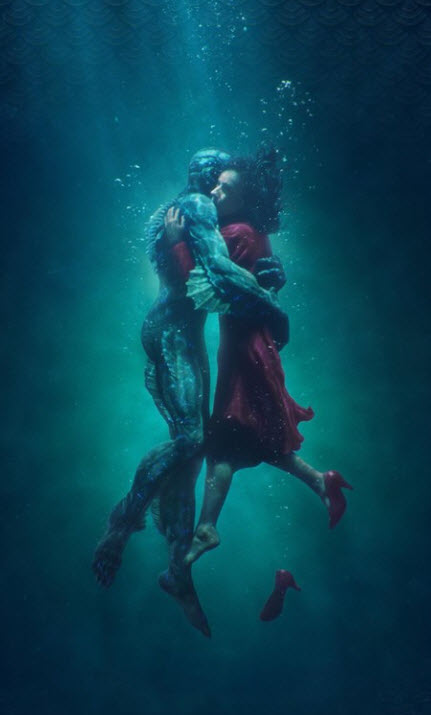 Elisa (Sally Hawkins) is a lonely spinster, a mute, who works as a janitor at a “black” government installation in the Cold War era circa 1962.

She discovers a “fishman” creature in a secret laboratory that is being abused by its keepers, headed by a sadistic government agent. She falls in love with the creature. When she finds out that they intend to kill it, she decides to launch a rescue effort.

Sally Hawkins plays an “odd” woman in the Elisa role, somewhat reminiscent of Maudie from last year, where she played a crippled artist.

The Shape of Water got very high reviews by the community. To me, it was a letdown. First, I don’t understand the title. I am not sure what the shape of water is supposed to mean, other than there is an amphibian man in the leading role.

The amphibian man is a human in a fish costume, who makes odd sounds, and supposedly can breathe air with lungs and water with gills. The movie makes no effort to explain if the creature is supposed to be an alien or an evolved human swamp creature. Through the course of the movie Elisa ends up in a sexual relationship with the amphibian man, so I assume he’s supposed to be human. But then, why are the government agents so stupid and act like they are not expecting the creature to be intelligent, or have feelings, like a human does. He sure looks like a human in a fish suit! The whole plot, and many of its components, just didn’t make sense to me, to a degree where I found it distracting.

But then, perhaps the whole story was meant to be a fairytale and I was not supposed to reason about it? Maybe I was supposed to just enjoy it?

I am not sure if The Shape of Water is a fairy tale, a science fiction thriller, or a mystery romance story. It has components of all of those.

In the end, I walked out of the movie somewhat unsatisfied.

2 thoughts on “Movie Review: The Shape of Water”