The opinion of this so-called judge, which essentially takes law-enforcement away from our country, is ridiculous and will be overturned!

Our so-called president uses bully tactics and fear-mongering to get his way.

Because the ban was lifted by a judge, many very bad and dangerous people may be pouring into our country. A terrible decision

Here he talks about how many very bad and dangerous people may be pouring into our country.

Checking monthly tourism statistics, I found a chart that shows the number of non-residents entering the United States in the first 7 months of 2016 (through July): 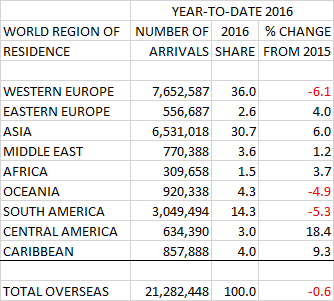 This shows  there were over 21 million people who “poured into our country” and I am sure a few of them were “bad hombres.”

The only United States terrorist attack during that period that I remember was the San Bernardino bombing, and that was perpetrated by a couple that lived and worked in the United States.

No travel ban would have stopped them.

What Trump is doing here is fear-mongering for the ultimate end of grabbing political power for himself. It’s right out of the playbook for dictators. Keep the people in a fear frenzy.

How do they expect us to treat them with any respect?

Don’t we ever learn?

And that’s my rant today about our so-called president.

One thought on “So-Called President Trump is Fear-Mongering”