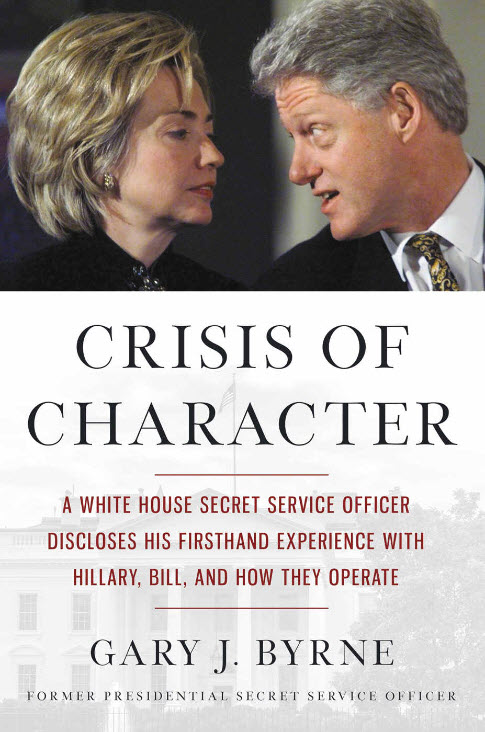 A White House Secret Service Officer Discloses His Firsthand Experience with Hillary, Bill and How They Operate.

Gary Byrne was a uniformed Secret Service agent who started his White House duty during the first Bush administration. He was there when the Clintons moved in, and through most of their tenure in the White House. He was there outside the door when Monica Lewinski was in the Oval Office with the president. Whether he wanted to know what was going on or not, he knew, and he had no choice.

Later, when the scandal blew open that would eventually get Clinton impeached, it was Gary Byrne who was catapulted into the national spotlight by being forced to testify against the president, his protectee. He was in an extremely tenuous and dangerous position. On the one hand, the Secret Service has incredibly tight protocols about revealing information about their processes and their protectees. On the other hand, the FBI was investigating the scandal and Ken Starr with his Grand Juries was pressing forward for information. The Secret Service was threatening him to stonewall, and the FBI was threatening to arrest him. Either way, he could lose his job, his career and his credibility. He was alone in the middle.

And he believed it was the recklessness of the Clintons, and their disregard for everyone in their way that put him, and many others, into impossible situations.

Reading Crisis of Character reveals a fascinating look behind the scenes in the nation’s most elevated offices, the West Wing of the White House.
This is not a tell-all book by a disgruntled Clinton hater. This is a book by a man of character who has spent his entire life trying to do the right thing, every step of the way. He tells his story beginning with Papa Bush, as he calls the elder President Bush, and Barbara Bush, whom he describes as graceful, honest and hard-working, through the Clinton administration, and his career with the Federal Air Marshal Service after 9/11. We learn about the lives of the men and women who have pledged to throw themselves into the paths of bullets to protect their clients, whether they agree with their lifestyles and choices or not.

For that reason alone, regardless of the fact that the Clintons are exposed, you should read this book. Yet, I must admit that I am glad I read it after the election, not before.

Byrne describes Bill Clinton as the friendly, jovial and charming man that we all know, even though he made some terrible moral choices and caused irreparable harm to the dignity of the office, his own career and pretty much everybody who got in his way or crossed his path.

One surprise to me was the portrayal of Monica Lewinski. She was a very young intern in the White House, and from the time the scandal actually occurred more than twenty years ago until now I had always thought of her as the victim of a sexual predator, namely Bill Clinton. However, I now know that it was not so. There is no way an intern in the White House would ever even get near the president. To be in the position she ended up in, she was actively stalking him relentlessly for months, making up daily schemes just to get access to the West Wing and somehow cross paths with the president. Byrne knew that, because much of the time it was he who had to turn her back. I now know that Monica Lewinski was not a victim. She got exactly what she aimed for. She was just too young and naive to know how it would end, and what it would do to her life. And of course, Clinton was a ruthless sexual predator.

At one place in the story Lewinski was held back by the Secret Service in the guard house outside the White House at night because the guards knew the president was with another young woman. When she eventually blew up and threatened them, one of the agents lost his cool and blurted out that “he was with another piece of ass and she had to wait her turn….”

And finally, there is the portrait of Hillary. He describes her as cold, calculating, and utterly ruthless. There was one time when a young agent wished her a “good morning, ma’am” and she just shot back “fuck off!” What does it say about the character of a woman who talks like this to Secret Service agents who are paid $50,000 a year and pledge to stop a bullet to protect her and her life?

So here it is: Gary Byrne’s story, to me, is so convincing that I do not think that I could vote for Clinton now that I read this book. I could not vote for Trump either, because I believe that 20 years from now some agent that had to protect Trump will come out with even more incredibly sordid information about our 45th president.

No, I could not vote for Clinton again, and I could never vote for Trump. I am glad Clinton is not president, and I am at the same time utterly dismayed that Trump is. What to do when a nation of over 320 million people comes up with those two choices to pick from?

I am truly, truly troubled about the terrible lack of character at the highest level of American politics.

You should read Crisis of Character.

Controversy followed the Clintons even when they were leaving office and purchased a $ 1.7 million mansion in Chappaqua, New York (so Hillary could carpetbag to the U.S. Senate from New York). Per its normal procedure, the Secret Service maintained a detail at their residence to continue to protect the former First Family as Hillary prepared and ran for Senate. Nothing out of the ordinary there. Perfectly proper.

To protect the Clintons, Secret Service personnel were stationed at a former garage on the property, and I had the chance to spend some time there on protection details myself. Rumors have since swirled that the Clintons receive $ 1,100 per month rent from the Secret Service.

That doesn’t appear to be the case. But what I heard from other Secret Service personnel on the scene was this: The Service paid $ 7,000 per month rent on an adjacent house to serve as their unit headquarters from a rental company. Again, nothing wrong there. But what was also well known and what I also heard was that— at least for a while— the Clintons were charging the identical amount for that small garage of theirs to the Secret Service to basically have the Service cover the cost of their mortgage as Hillary ran for office.

I can’t verify that (I’m former Secret Service— not Ken Starr), but it’s interesting to once again contrast the Clintons with Papa Bush. The USSS did, in fact, cover the costs of renovating former president Clinton’s garage, which was mostly space heaters and meager basic utilities.

When Papa Bush was still president, the Secret Service needed to construct a facility on his Kennebunkport, Maine, property. President Bush said fine— but on two conditions. One, make it bigger, so you guys aren’t cramped. He cared about the little guys. Two, you’ll be protecting me after I leave office— so I’m paying for it.

Just last year, Mrs. Clinton claimed that as secretary of state she didn’t carry a work phone. It was too cumbersome and inconvenient for her to carry two phones. She didn’t have room for them.

Then we learned she had email— on a private server. But then she claimed her email was for personal correspondence, yoga, and wedding planning.

Then we learned her email contained government business as well— lots of it.

Listen, nobody transmits classified material on the Internet! Nobody! You transmit classified material via a closed-circuit, in-house intranet or even physically via courier. You can’t even photocopy classified data except on a machine specially designed for hush-hush material, and even then you still require permission from whatever agency and issuer the document originated.

So the only way for that material to be transmitted over an email is for her or someone in her office to dictate, Photoshop, or white-out the classified material in question, to remove any letterhead, or to duplicate the material by rewriting it in an email.

I repeat: To duplicate classified material without permission or to send it over an unsecured channel is completely illegal. That’s why every government agency employs burn bags, safes, and special folders for anything marked Confidential, Secret, and Top Secret. People have lost their careers and gone to jail for far less.

Yet Hillary Clinton transmitted classified material by the figurative ton. No one else can operate like that in government. But she takes her normal shortcuts and continues to lie about it.

There is no greater example of double standards in leadership than First Lady, Senator, and Secretary of State Hillary Clinton. Is it too inconvenient or cumbersome for her to follow the same rules that agents in the field have to follow? Maybe it would make morale too high? Clinton’s behavior harkens to the old motto: “The beatings will continue until morale improves.”

One thought on “Book Review: Crisis of Character – by Gary J. Byrne”