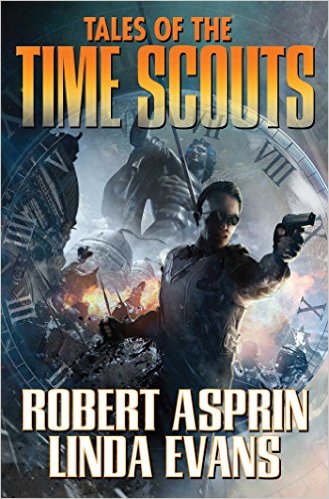 Tales of the Time Scouts is time travel story with a great premise. It is also the first of a series of four books.

Due to a scientific accident, time gates have developed all over the world. People walking through these gates end up in different places at different times. The stable gates reappear at predictable intervals, sort of like the Old Faithful geyser. But the intervals are not initially obvious, and the destinations of gates must be explored. To make it worse, gates sometimes are unstable. Walking  through an unstable gate can, of course, be fatal, or fateful. It could be a one-way ticket and you could  be stuck in a dinosaur world with nothing but your pocket knife.

Time Scouts are individuals whose job it is to explore the gates, and document their specifics. A stable gate can then be used for research, trade, and time tourism. It’s possible, with the help of Time Guides, to visit ancient Rome, for instance.

The time portals are like transit stations, you can think of them as train stations or airports, except the departures are going into times, not places.

I have serious issues with the credibility of the main characters. One is Kit Carson, the most famous time scout of all, who is now retired, working as a hotel keeper at Time Terminal 86. From the description and behavior, I have formed a picture of Sam Elliott in my mind for Kit Carson. Margo, a girl barely 18 years old, desperately wants to be the world’s first female time scout. Females have never been used as time scouts, because in almost all societies in the past, in almost all eras, females were at best second-class citizens, and often abused, enslaved and worse. It’s not considered healthy for a female to show up in ancient Egypt, for instance, come up with a credible story and actually survive to return when the gate opens again.

For that reason, nobody is willing to train Margo. Everyone thinks it’s a suicide mission. She vehemently insists on fulfilling this goal. However, she constantly does stupid stuff. When she has to work at learning self-defense, she mopes.  When math is involved, she complains. When book learning comes up, she rebels.  Her behavior just makes no sense. If she were really dedicated to success, after she convinced the most renowned person in the business to train her, why would she keep bickering and sabotaging her own training?

Her juvenile behavior and her inconsistent character traits make for a jarring story line. I found myself constantly annoyed by Margo’s immaturity and stupidity, to the point where I lost interest.

Why the authors chose a hot-looking 18-year-old girl as protagonist for this story I do not understand. The story, the premise, is very promising and thought-provoking. Margo’s character destroys it.

I gave up at about 15% into the book. Perhaps Margo’s role gets better as the story goes on, I’ll never know, and I won’t be reading the sequels.

Not star-rated because I didn’t finish reading the book.

One thought on “Book Review: Tales of the Time Scouts – by Robert Asprin and Linda Evans”