Check out this map and look at Egypt: 91 percent of all females in Egypt are mutilated. 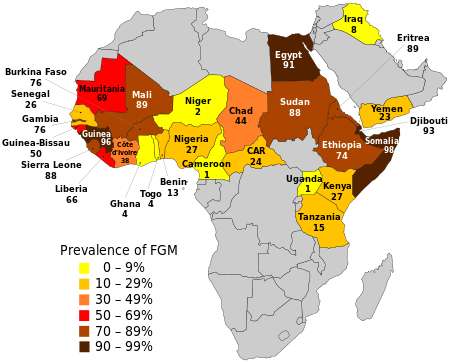 Egypt’s Ministry of Health and Population has banned all forms of female genital mutilation since 2007. The ministry’s order declared it is ‘prohibited for any doctors, nurses, or any other person to carry out any cut of, flattening or modification of any natural part of the female reproductive system’. Islamic authorities in the nation also stressed that Islam opposes female genital mutilation. The Grand Mufti of Egypt, Ali Gomaa, said that it is “Prohibited, prohibited, prohibited.” Egypt passed a law banning FGM. The June 2007 Ministry ban eliminated a loophole that allowed girls to undergo the procedure for health reasons. There had previously been provisions under the Penal Code involving “wounding” and “intentional infliction of harm leading to death”, as well as a ministerial decree prohibiting FGM. In December 1997, the Court of Cassation (Egypt’s highest appeals court) upheld a government banning of the practice providing that those who did not comply would be subjected to criminal and administrative punishments. According to a survey in the year 2000, a study found that 97% of the country’s population still practiced FGM; a 2005 study found that over 95% of Egyptian women have undergone some form of FGM.

This is the same Egypt to which the U.S. supplies military funding of $1.3 billion annually. And here you have me say it like Donald Trump would say it:

What the hell are we doing?