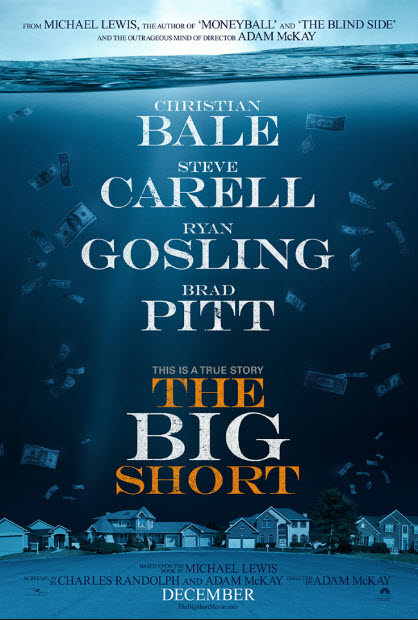 I chuckled, often, and I gasped, more often.

A few smart and awkward geeks figured out that there was something wrong with the housing market soon after George W. Bush took office. They bet against the United States economy, and everyone around them thought they were insane. Those few knew ahead of time what would happen in 2008, when Bush was just about to leave office. The economy would crash. The large banks would fail.

We all know how it ended.

I happened to own an investment property that lost 65% of its value in 2008, and today, seven years later, it’s still not back up to where I bought it. I am paying.

Everyone I know was hurt by this. Except the big banks. They are now bigger than they ever were, and they are working on the next big scam.

The American tax payer bailed them out, and they bailed out the world economy. We’re blaming Obama for it all, for the “weak recovery” and the “endless spending.”

Go watch The Big Short and I predict you’ll walk out disgusted.

You’re likely to go home, get on your computer, and donate to Bernie Sanders in protest.