I found this on the front-page of Reddit. Here is the Reddit post with all comments. Of course I cannot attest to the authenticity of this note. Somebody found it in a sock he bought. But if it is even remotely authentic, it is frightening. The products that we buy every day at Target and Wal-Mart (see the Made in China labels on all your Christmas presents) are manufactured in part by victims like this man. This is going on today, while we are out shopping. 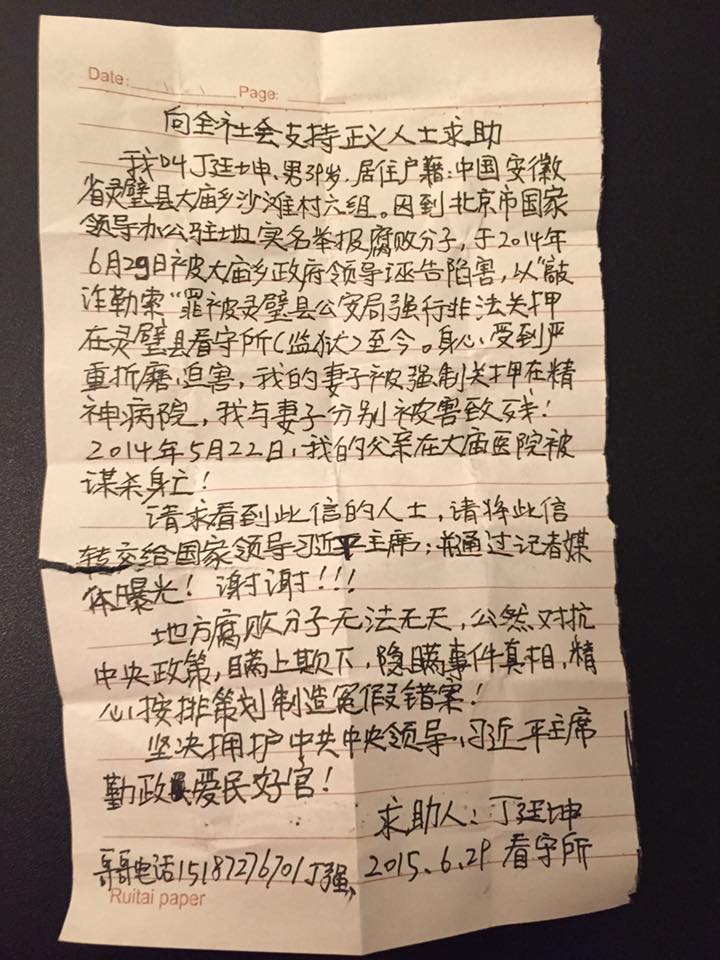 To all members of society who support justice, please help.

My name is Ding Tingkun. I am a 39-year-old man. I live in China, Anhui Province, Lingbi County, Damiao Town, Shatan Village, No. 6 Group. Because I went to Beijing to report corrupt officials in person, on 29 June 2014, I was framed by the Damiao Town government leaders for “extortion.” I have since been shut in the Lingbi County jail. I have suffered great mental torment. My wife was forcibly locked up in a mental hospital, and both she and I have been crippled by injury! On 22 May 2014, my father was murdered in the Damiao hospital!

Please, anyone who reads this letter, please pass this letter on to our country’s leader Chairman Xi Jinping, and through the media bring these things to light! Thank you!!!

Local corrupt officials have no law and no heaven. They publicly oppose the central government’s policies, satisfying their superiors but deceiving the public. They cover up the truth of things. They painstakingly arrange schemes to manufacture false charges!