A few days ago this image showed up on my Facebook feed, and I shared it. 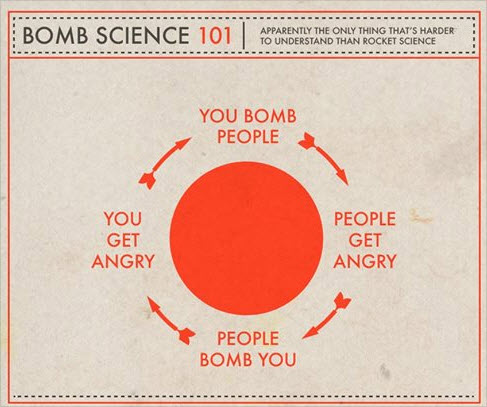 When you shoot people, they will try to shoot back.

Not many governments have the huge resources available required to deploy drones. The United States is one of the few. If you want a better understanding of our drone program in form of a movie, watch Good Kill and get yourself shocked.

Here is a post that elaborates on this: Do Mass Killings Bother You? – by David Swanson.

Our drones are killing machines, doomsday robots we only knew in science fiction movies a few decades ago, that descend out of nowhere, unheard, unseen, and shoot missiles. We have documented cases where the United States has shot missiles into wedding parties, killing dozens of innocent people, women and children, because there was a terrorist in their midst.

We also have a policy to “double tap” which means we shoot another missile into the aftermath of the first one. Since the rescuers on the ground know that, they don’t go into the original death scene and this ensures that the wounded there are slowly dying in agony with bystanders watching from a distance, unable to help or risk their own lives.

This is war at its very, very worst.

Do we think that a young boy who sees his mother, his father, his siblings murdered this way, might be inclined to join the jihad and fight the people on the other side of the planet that send killer robots their way? You bet. I am sure I would too if I were that boy and an American killer robot had blown away my mom and dad.

People Bomb You. You Get Angry. You Bomb People.

This bombing is done by the American government. Our president orders it. He does it in the name of the American people, in my name, with my tax dollars.