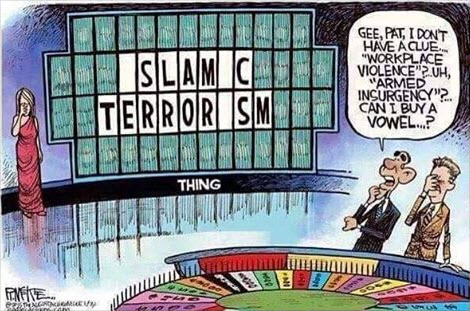 Looks like the San Bernardino shooting is another incident of Islamic Terrorism on United States soil.

Sorry to all the 99.9 percent “good” Muslims. They too have a responsibility. It sure appears as if their religion and their God consistently motivated the believers to kill innocent people to further the control of the religion over its people. Islam appears to me to be a very violent and deadly religion.

Christianity was just like that, but mostly between the years 800 through 1600, at its height during the crusades. It kind of got over this tendency, except in the United States where there are still a few Christians who think it’s a good thing to kill providers of certain medical services in the name of their God. But Christian terrorism is nowadays fairly small.

Muslims, however, should clean up their ranks and straighten out their religion. This is not working very well for them right now. Their extremist arm is obviously trying to pull the world into WW III. Nothing would suit them more than everyone dead, and the caliphate flourishing, keeping women dumb and enslaved, keeping the elite rich, and making peasants of everyone else. Let’s all go back to the year 1200.