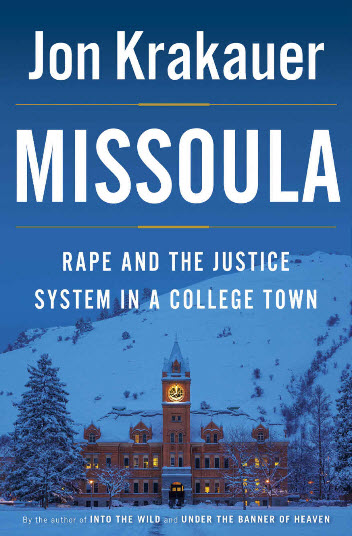 Rape and the Justice System in a College Town

Jon Krakauer, the author of Into the Wild, Into Thin Air, Under the Banner of Heaven, is a masterful journalist, researcher and author. I have read all his books. His last book before this one was Where Men Win Glory.

When we think about rape, the image of a thug wearing a black ski mask jumping out of the bushes at night, wielding a knife, and forcing a female victim to have sex comes to mind. That’s what we think a rapist is.

In reality, a large percentage of rapists are non-strangers, and very often the boundaries of rape are blurry. A couple starts out necking and making out, taking off each other’s clothes, and then something happens and the woman changes her mind. “No” may not be perceived as “no” by the male, one thing leads to another, and rape occurs. How will the police, the prosecutor, and the jury deal with these facts?

In the book Missoula, Jon Krakauer takes on this very challenging subject. With his customary meticulous style, he reports about the circumstances of a number of rapes in Missoula, Montana, involving the Grizzly football team and its athletes, which made headlines for a string of rapes and high-profile court cases.

The Department of Justice investigated 350 sexual assaults reported to the Missoula police between January 2008 and May 2012. Apparently few of these assaults were properly handled by either the university or local authorities.

When the accused are high-profile football players in a comparatively small community, it is a treacherous road for a woman who has been raped to report the crime. The criminal justice system structured so the defense has to tear down the victim, make her out to look like slut who “wanted it” and when she changed her mind, she took down the beloved athlete. It’s not unlikely that the rape victim is reviled and ostracized by the community, which makes her a victim all over again.

Due to this brutal reality, acquaintance rape is the most underreported crime in America.

Krakauer tells us about the experiences of several women in Missoula, starting with the nights when they were raped, and leading through their self-doubt afterwards. He shows how they were treated by the police, the prosecutors, and defense attorneys. He illustrates the vilification by the public. And he analyzes and describes the criminal justice system as it relates to rape.

This book is challenging to read. It takes a lot out of the reader to take in the minute and stark details of each rape. We feel like we are in the room when they happen. Missoula is a powerful and insightful book for anyone that wants to better understand rape in modern America.