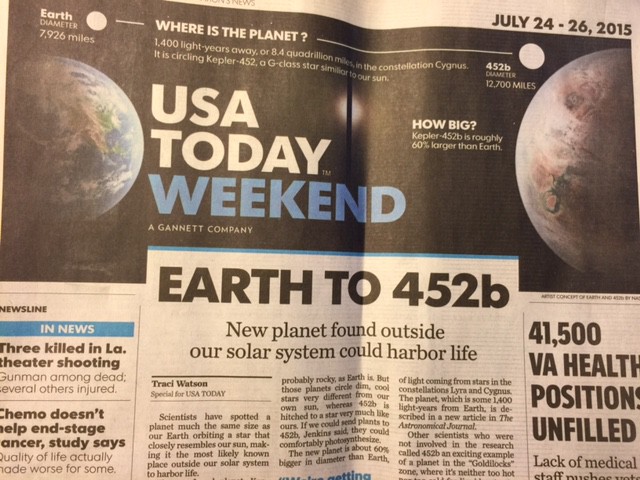 The headline in USA Today was startling. A ‘Goldilocks’ planet was found, one that could harbor life as we know it, based on the fact that there could be liquid water on its surface. It’s a bit lager than Earth, approximately 12,700 miles in diameter, compared to Earth’s 7,926.

What the article didn’t say, however, is what it would be like to stand on that planet, earthlike or not. With a diameter this large, the volume of the planet would be about 4.3 times that of earth, so its mass would also be that much bigger.

Gravity is proportional to mass. This means that if you weigh 150 lbs on Earth, you’d weigh more than 4 times as much, over 600 lbs on 452b.

We couldn’t land there and be comfortable. Any beings used to that, probably squat end Jubba-like, would feel like bouncing balls on Earth.

The planet is 1,400 lightyears away.  If beings on that planet sent us a message in the year 600, the message would arrive just about now.

To put the time into perspective: In the year 600, Pope Gregory the Great decreed “God Bless You” as the religiously correct response to a sneeze. In the year 600, quill pens, made from the outer feathers of crows and other large birds, became popular. Mohammed, the founder of Islam, was alive during that time.

Suppose we received a message from any 452b beings. If we responded now, our answer would reach them around the year 3,400.

If we could build a ship that could travel at a tenth the speed of light (which is way beyond our current capabilities), it would take the ship 14,000 years to get there.

I am ready to go. Where do I sign up?

5 thoughts on “Rumination about Planet Kepler 452b”