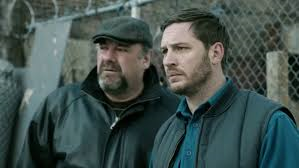 Bob Saginowski (Tom Hardy) is a lonely bartender in the grungy underworld of Brooklyn. His employer is “Cousin Marv” (James Gandolfini) who is doing shady deals on the side. One night the bar gets robbed and things go awry quickly. Bob finds himself entangled in the investigation, both by the authorities, as well as the local gangsters.

The Drop is a crime drama. The movie is James Gandolfini’s final film and was met with positive reviews for Gandolfini’s performance. The Tomatometer lists it with an 89%. His character, Marv, dies in The Drop. Gandolfini died of a heart attack shortly after the movie was finished during a vacation in Rome, Italy, at the age of 51.

The general theme of life in the underworld of New York has been portrayed in many movies. This one features pretty strong acting by some of the protagonists, but it’s also a confusing story. I am not versed with underworld and mob dealings, so maybe that’s why I had a hard time following what was going on.

The entire story plays in a gritty and most depressing environment. There is not a happy face in this story, ever, there is not a blade of green in this winter in Brooklyn, all the locales are decrepit and depressing. No wonder crime flourishes. There is nothing else.

Watching The Drop left me confused because I didn’t quite get the plot, and depressed. Maybe that was its objective. But I can’t rate it higher than one and a half stars – I wouldn’t want you to watch this and get depressed, too.