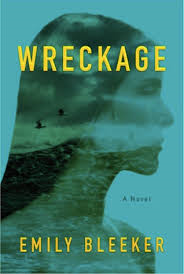 Margaret won a trip to the South Pacific with a companion. She chose Lillian, her daughter-in-law. The two women are on a small jet plane on the way to Fiji.

Dave is the public relations man hired by the company to escort the women on their trip. Theresa is the flight attendant. And Kent is the pilot.

The plane hits a storm, loses an engine and eventually performs a crash landing in the ocean. Theresa is dead – she was not strapped in when turbulence hit. The other four survive and float in the plane’s life raft in the vast Pacific, with a small first aid kit, and one 16 ounce bottle of water.

Eventually the raft arrives at a small, uninhabited island, and the four of them start the battle for survival. Only Lillian and Dave survive and are eventually rescued, almost two years later.

Wreckage is about survival, love, passion, fear and choices in life. Half the book plays in the present, after Lillian and Dave have been rescued, and what happens when they try to fit back into their old lives, with their spouses and families, who had long thought them dead. The other half of the book is told by Lillian and Dave as they experience the plane wreck, and their Robinson Crusoe life on the island.

Wreckage is a story that had me turning the pages and kept me wanting to know what happened next. But the organization of the book was not very fortunate. It distracted. I never quite got used to constantly having the change back and forth between the third person and the first person. That part didn’t work for me, and it definitely resulted in one less star overall.

Otherwise, Wreckage is a well-crafted mystery story of survival and life choices.

One thought on “Book Review: Wreckage – by Emily Bleeker”