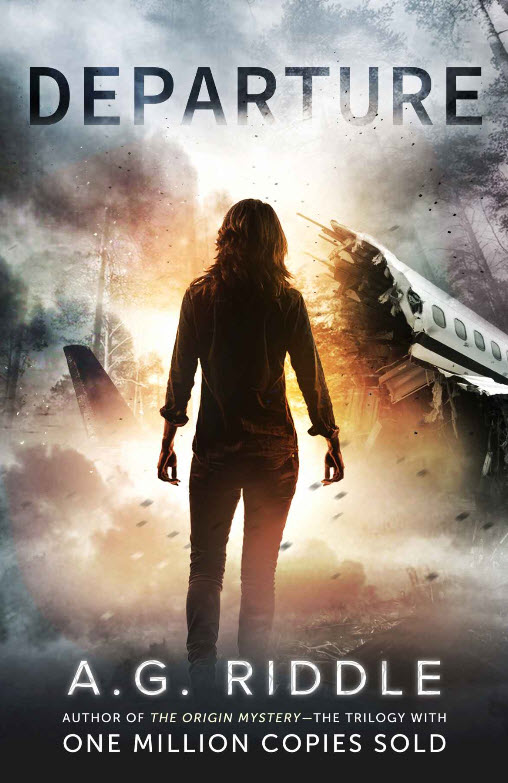 200 passengers board a Boeing 777 in New York, bound for London. The plane crashes in the woods somewhere in England. Nick Stone has the presence of mind and courage of spirit to get right to work helping his fellow survivors rescue as many of the victims who didn’t die. Harper Lane is a young British writer who finds herself in the middle of  the rescue, against her better judgment. Sabrina Schröder is a German research physician and the only doctor on board, with plenty to do patching up the injured passengers with not much more than a first aid kit and very little medicine. Yul Tan is a Chinese-American computer scientist who is on the cusp on inventing the next generation of the Internet.

When days go by and no rescue crews show up, these four unlikely protagonists quickly discover that the world they landed in is not quite right. As they slowly unravel what happened to them, they are thrown into a conflict much larger than they could possibly have dreamed.

Departure is an “accidental time travel” story, meticulously plotted and told in the first person by Harper and Nick, alternating, in journal-style. To make it even more unusual, the story is told in the present tense. This gives the action intense urgency and realism.

After recently reading a few amateurish novels that lacked editing, this was refreshing. Not a grammar error to be found, not a word missing or misspelled anywhere to distract me.

I have to say, however, that while the first third of the book was a page turner, the rest of the book, with perhaps the exception on the last 5%, was too contrived for me. There was lots of action, lots of intricate story development and plot, sometimes to the point where it was hard to follow. I must admit there were sections when I just skimmed and turned the pages to make it through those boring – or rather – overdeveloped parts so I could get on with it.

Overall, Departure was a fun, quick read, and it helped that it was about time travel.