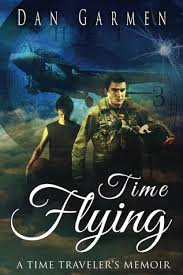 The story starts in 2007. Rich Girrard is a 47-year-old successful software entrepreneur who lives in San Diego with his wife and daughter. His zip code is 92127, which is in Rancho Bernardo, only a few miles from where I live. He describes a meeting in the Rancho Bernardo Carl’s Jr., a place where I have been many times, right across from the office of my dentist. I like that kind of detail. It draws me in.

A few strange things happen to him on a trip to Indianapolis. When he drives out of a shopping center, he is broadsided by a woman driving a Hummer through a red light while texting. He passes out…

…and wakes up in his boyhood bedroom, in his 17-year-old body, with his 47-year-old mind intact, in 1976. He figures out he must have time-traveled and resolves to live his life again, this time without all the mistakes. The majority of the book proceeds in the period between 1976, his youth and high school years, reaching to 1991, when he is an aviator on a carrier in Operation Desert Shield, kicking Iraq out of Kuwait.

I read Time Flying in a couple of days. I wanted to know how it would all resolve. After all, it’s a time travel story.

Garmen states about himself that he likes to write the books he’d like to read. That’s the difference between Garmen and me. I think about the books I’d like to read and then try to find them. He writes them. I respect that.

There are some problems with the book.

First, the plot, while a strong page-turner, does not quite fit together. I read the book in just a few sittings, wanting to know how the plot would resolve, only to find out it didn’t. Garmen set it up for a sequel. After reading what I thought was a stand-alone novel, I found out only in my research after I could not figure out the ending, that it really does not make sense.

Second, the book is in terrible need of editing. It is absolutely littered with grammatical errors, punctuation errors and missing words or additional words that don’t belong there. There are hundreds such errors, so many, that they are annoying and distracting from the story. I don’t understand why an author would not at least ONCE read his own book before publishing it. I paid $2.99 for it. That’s $2.99 too much for such a sloppy effort. A single reading before publishing could have eliminated 90% of the gross errors. Garmen wouldn’t need to hire an expensive editor for that. He would have to just READ his own damn book.

For that reason, this author does not deserve my business, and I won’t be buying any more Garmen books. I like his creativity, has passion, and his story-telling skills, but I am insulted by his laziness and his willingness to put his name on such a low-quality package and charge us for it.