I am a polluter, and I need to correct my ways.

Recently I read the book The World Without Us, where I learned that basically every piece of plastic we have created since about the 1960s ends up either in a landfill, or in the ocean. Much of the plastic floats. Some of it looks like it disintegrates, but it really doesn’t. It just turns into ever smaller globules of plastic that live practically forever.

Sometimes, when I know I will be home alone after work, and I know there is nothing at home to eat, and I don’t want to bother preparing anything, I may stop at Kentucky Fried Chicken for some takeout. I’ll order a two-piece meal, original style, breast and wing, with potato wedges and coleslaw for about $6.75. The attendant hands me a plastic bag that contains my order.

When I get home and when I am done eating, I am left with:

Once when I bought a meal for two, I got 17 sporks in the bag: 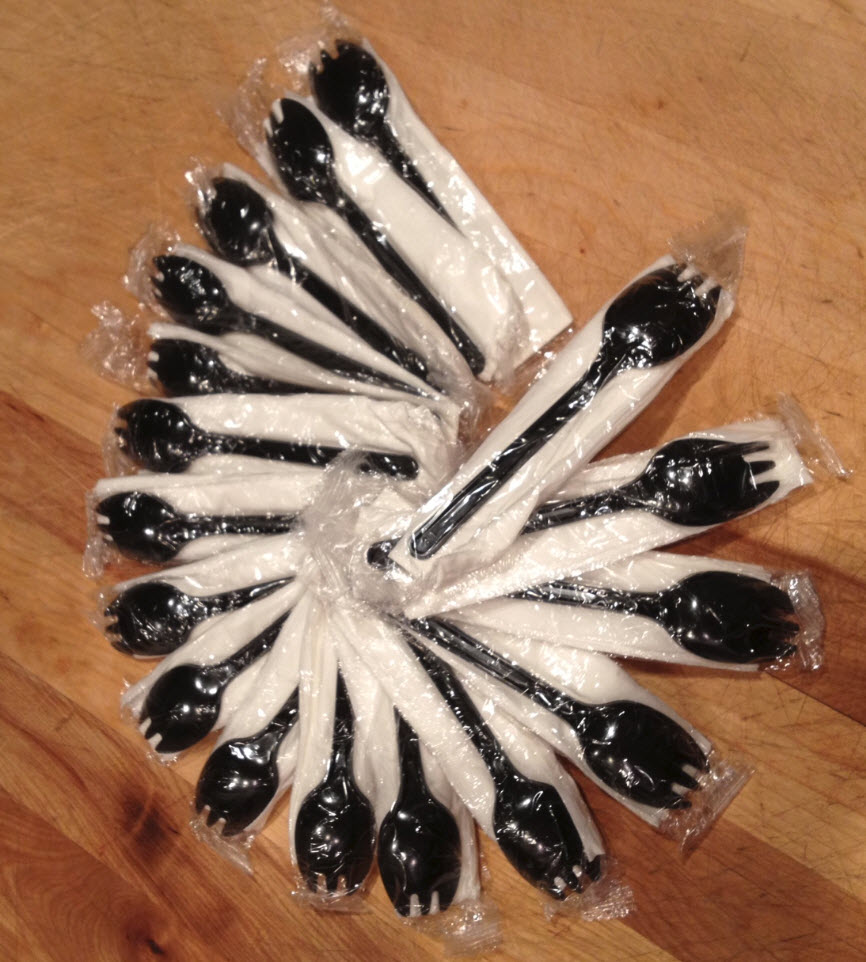 I know I can save the sporks, but for what? I didn’t need them in the first place, and we will never have enough picnics to ever need them. Unless I want to start a KFC spork collection, which I don’t. So they go into the trash, along with the cardboard boxes, the bag, the container, and even the honey packets.

Never to be used again. Never to have been used. In a landfill. A million years from how, some archeologist will dig out a layer of rock and find these 17 sporks, along with my coleslaw container and its lid, in the plastic bag.

So now I think about that every time I take a plastic utensil to use for one meal, one piece of cake, one small container of coleslaw, or just to stir my coffee.

What a phenomenal waste!

I am an accidental polluter.

[Edit: the term “trash” here means “recycled trash” in California. However, I am not sure I fully trust the recycling system – I wonder if they give tours so we can follow the sporks through the process….]

3 thoughts on “The Accidental Polluter”