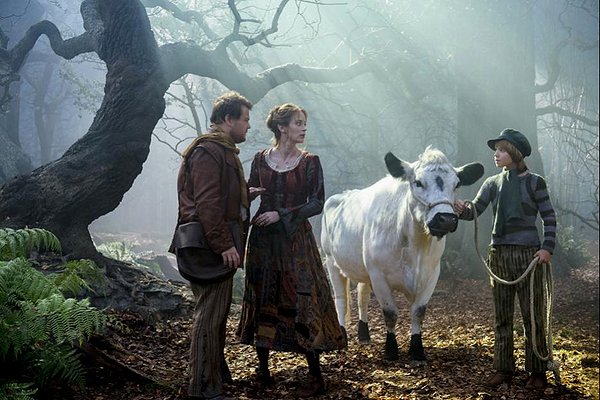 The witch (Meryl Streep) has put a curse on her neighbor, the baker and his wife (James Corden & Emily Blunt), preventing them from ever having a child. She commands them to get her a cow as white as milk, a red cape, hair yellow as corn and a golden slipper.

This weaves together the Brothers Grimm fairy tales of Jack and the Beanstalk, for the cow, Little Red Riding Hood for the cape, Rapunzel for the hair and Cinderella for the shoe.

Into the Woods is a musical, where most of the dialog is sung, with complex melodies, and orchestral background music, that makes all the songs sound alike. Unlike other musicals, where you can walk out with an earworm in your head, because it’s comprised of distinct songs, when you walk out of Into the Woods, singing “Into the Woods” is all you can do.

The musical dialog is fresh and sometimes humorous, and the acting quite entertaining. The scenes and costumes are elaborate. I was skeptical when I first started watching, but the story and the way it is presented is so different, so unique, and so elaborate in its own way, I actually enjoyed it all the way through the two hours and five minutes runtime. To me, it was enjoyable, solid entertainment, something very different from the normal movie experience. Something unique.