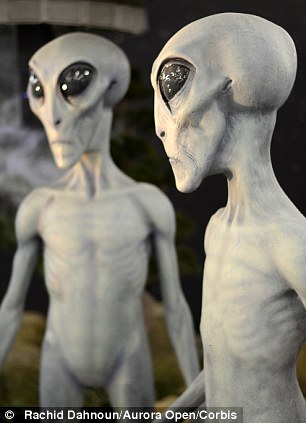 There has been a lot of press lately about Boyd Bushman, a former Lockheed Martin and Texas Instruments engineer who died on August 7th at the age of 78, who left behind a video with claims about extraterrestrial life as evidenced by the Roswell aliens. Here is a link to one such article. It’s going to take a bit more than a story told by a goofy old man in a poorly made video, showing grainy photographs about something that supposedly happened 67 years ago, to make me buy into little grey men with big heads.

However, the idea that aliens like those that Bushman describes, are humanoid, is utterly improbably. If they had developed from common ancestors with humans, it would be understandable. But it is hard to imagine how those brothers of ours left the Earth some 50,000 years ago and went to colonize a planet 65 light years away, with just enough evolutionary divergence to become bald, smaller, frailer and have bigger heads and eyes, but still retain two legs, with knees bent forward, ten toes and ten fingers, two ears, two eyes, a mouth, a nose and a skull above it all with a brain shaped like a large human brain. The odds of aliens being humanoid are infinitesimally small.

Bushman says that the aliens communicated with humans telepathically. Let’s assume for a moment that telepathy exists, and two brains can communicate ideas across “thin air” without any other means, even though there is not one shred of evidence that such a feat is actually possible. Then it would make sense that two humans, with the same communications gear (our brains) could communicate with each other by that method. My question is: does telepathy use language? Is telepathy bound by language? Two healthy humans with high IQs cannot communicate with each other if one only speaks English and the other only Japanese or any other language. Anyone that has ever traveled knows what that means. If you don’t know the language, you have absolutely no idea what’s going on in the other person’s head – all you have left is body language, and that does not convey complex concepts. But here we have alien beings, presumably completely unrelated to humans, with no shared DNA,  with completely different evolutionary background (even though they look like small frail humans for some reason), and they can walk into a room and telepathically communicate with humans?

We have shared our planet with intelligent beings for as long as humanity has existed. Those beings are the whales, dolphins most prominently. Dolphins are thought by many researchers to be just as intelligent as humans. They simply didn’t start developing tools due to their natural environment and the evolutionary path they took. But they have language. And in all the centuries that we have shared with dolphins, in the decades that researchers and linguists have tried to learn the dolphin language, we have not yet succeeded. And here are dolphins, which share a large amount of DNA with us, who live on our planet with us, and we can’t communicate with them.

But aliens just crash at Roswell, get transported to Area 51, and start teaching our engineers advanced concepts?

Bushman says that the aliens come from a planet that’s 65 light years away but the trip only takes about one hour. We humble humans have so far not found any evidence that it is possible to travel faster than light. That is not to say that someone else hasn’t figured that out. So let’s assume that these aliens indeed have ships that can travel 65 light years in an hour.

Why don’t they have a shuttle service and a spaceport here on Earth? We could travel to their planet for lunch and be back at the office mid-afternoon for a meeting. Think about the trade, think about the cultural exchange we could have with such an ability to travel? Why did they come here in 1947, and then every few years, in secret, to be spotted on misty nights in the woods, killing cows, abducting humans, just to hide again? What’s with the secrecy? If they knocked on my door, I’d let them in. If they wanted to take my blood samples, go ahead. If they wanted to take me on a trip 65 light years to their planet, I’d go in a minute, and so would another million people.

Why hide in Area 51 surrounded by old Lockheed engineers?

Yet, there is not a single tweet with a picture of one of them. There is no Facebook post. There is no picture on Instagram. Nothing. No leaks, no real evidence, in 67 years! That is not possible.

Ah, of course, there is Boyd Bushman, with his grainy photographs held up in his goofy video. Maybe I have it all wrong.

One thought on “Aliens”