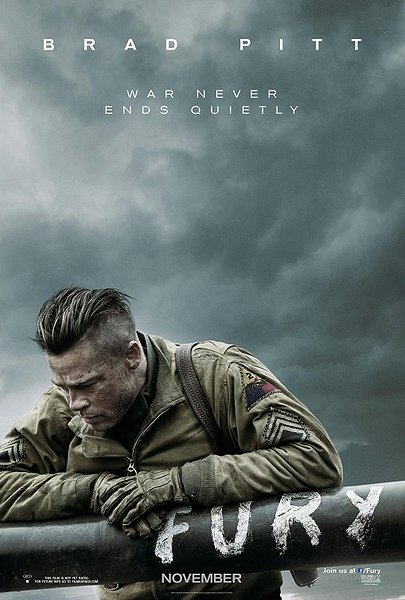 War ends lives in desolate fields, overseas, in mud, in smoke, away from all that we love, alone, desperately alone. War wastes people.

It is April 1945. The Americans have pushed deep into Germany from the west. The Russians are advancing on Berlin from the east. Germany is all but defeated. Hitler, however, has ordered an all-out battle, recruiting children, elderly, anyone that can hold a gun to fight to the end. The SS hangs Germans who resist in this effort from telephone poles with signs around their necks reading slogans like: “I didn’t allow my children to fight for my country.” Hitler’s scorched earth initiative is underway.

Wardaddy (Brad Pitt) is an army sergeant and tank commander of a Sherman tank. He is with a platoon of a handful of tanks deep in Germany behind enemy lines. When his second in command dies, he is assigned a rookie soldier, Norman, who has been in the service only eight weeks and has never seen combat. To make matters worse, their platoon commander gets killed by an ambush, placing Wardaddy in charge as the next in line.

Hopelessly outgunned, they are assigned near-suicide missions inside Germany, running into ambush after ambush as they roll through the villages.

War is absurd. What it does to people is absurd. The objective of war is absurd. In Fury we see deep into the souls of five men who are in an impossible situation, each dealing with the insanity of what is going on around him in his own way. The men are trapped inside 30 ton graves. They desperately do the only thing they can do to get a chance of ever making it back, which is killing everyone that crosses their path. War never ends quietly.

This movie took a lot out of me. It is timely, especially now as we talk so much about war.