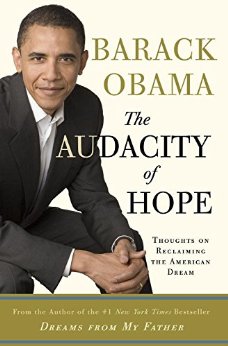 And if you want an objective and refreshingly candid view into modern US politics post 9/11, read The Audacity of Hope.

Obama tells about his background, starting with his childhood, and how he came about getting into  politics. As I read, I get to know a man who cares about the issues and obviously has an ability to verbalize his opinions succinctly. You understand why Obama feels about the issues the way he does.

Obama is not your average African American male, but he had to face the same challenges they have to deal with on a daily basis. The tells us what it feels like, being a U.S. Senator, dressed in a suit, standing outside of an expensive restaurant, and having somebody drive up in a Lexus and toss him the keys, thinking he is the valet.

You learn what it’s like to be a freshman senator. He tells the story of how he got to know Senator Byrd, President Bush and many others of the power brokers in Washington. He is candid and humble. I can’t help myself thinking how here is a man who actually ends up at the top of the Washington pyramid not because he was bred for power all his life (like Kennedy, Bush, McCain, and many others), but because he has a clear-thinking mind, a concise way of expressing himself, and a humble, no-nonsense attitude about his place in life and in politics. He appears to be an unadulterated man.

There were many passages in this book that I enjoyed, but this is one I’d like to pull out for your amusement, from page 326:

One day in February I found myself in particularly good spirits, having just completed a hearing on legislation that Dick Lugar and I were sponsoring aimed at restricting weapons proliferation and the black-market arms trade. Because Dick was not only the Senate’s leading expert on proliferation issues but also the chairman of the Senate Foreign Relations Committee, prospects for the bill seemed promising. Wanting to share the good news, I called Michelle from my D.C. office and started explaining the significance of the bill – how shoulder-to-air missiles could threaten commercial air travel if they fell into the wrong hands, how small-arms stockpiles left over from the Cold War continued to feed conflict across the globe. Michelle cut me off.

“I found ants in the kitchen. And in the bathroom upstairs.”

“I need you to buy some ant traps on your way home tomorrow. I’d get them myself, but I’ve got to take the girls to their doctor’s appointment after school. Can you do that for me?”

“Ant traps. Don’t forget, okay, honey? And buy more than one. Listen, I need to go into a meeting. Love you.”

I hung up the receiver, wondering if Ted Kennedy or John McCain bought ant traps on the way home from work.

The funny thing is, he wrote this in 2006, when the decision to run for president was not made yet, of course, and he had no way of knowing that he’d be facing McCain, of all people, in the final 2008 election.

No matter what your political bent is, this is a book that is eminently readable, full of common sense, that gives you a good insight into the man that looks like he is transforming an entire political generation.

Another must-read before we vote this fall.