…are those the lie about stuff that is easily proven wrong within seconds.

Does Trump not realize that people keep records of his tweets and archives of his words in video?

He must know that, right?

And if he does, he thinks we’re all ignorant, stupid and lazy and wont’ bother checking.

Either way, he is insulting me. 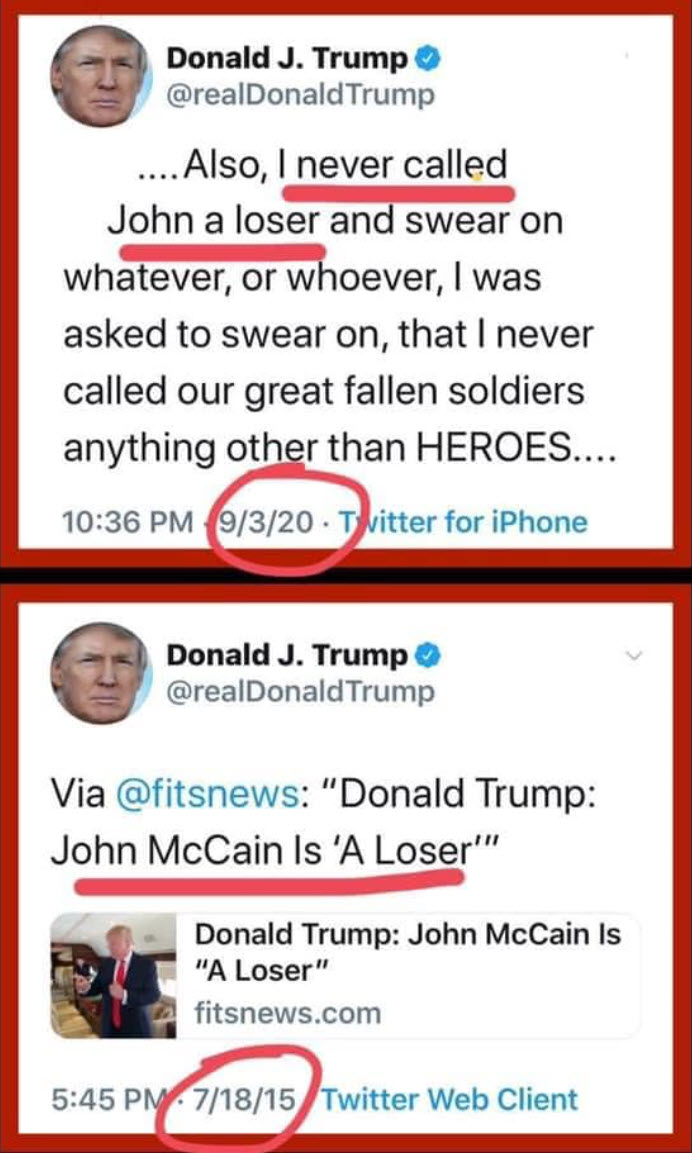 In Trump’s denial, he said on Twitter and to the media that he had not made these remarks — although, he added, he thinks McCain was less successful than he has been in taking care of veterans.

“I disagreed with him with respect to the vets and the taking care of the VA. I wanted to do it a much different way, and I think it’s proven to be a much more successful way when you look at the success we’ve had with the VA and with our vets — with Choice and with Accountability, all the things I’ve got,” he said after disembarking Air Force One after a trip to Pennsylvania.

Again, Choice — which allowed certain veterans to be covered by the government for receiving care from doctors outside the VA health system — is not something Trump “got.” What Trump actually signed was the VA MISSION Act of 2018, which modified and expanded the private-care program created by the Choice bill.
The full name of the VA MISSION Act honors McCain: it is the John S. McCain III, Daniel K. Akaka, and Samuel R. Johnson VA Maintaining Internal Systems and Strengthening Integrated Outside Networks Act of 2018.

Trump made at least one other false claim in his denial: he said he had “never” called McCain a loser. In fact, he did so at a 2015 event in Iowa, on camera — saying of McCain’s defeat in the 2008 presidential election, “I never liked him as much after that, because I don’t like losers.”
Later the same day, he tweeted out an article that was headlined, “Donald Trump: John McCain Is ‘A Loser.'”

Have you noticed that since the age of Trump, everyone lies.

The entire “main stream media” makes up stores and lies. The journalists at rallies are dishonest and disgusting people. The authors of books are all making up fictitious stories. Former Trump staff members plead guilty to felonies without trials and then make up stories to make the president look bad.

Since about the summer of 2016, everyone is dishonest everyone lies, and only one person tells the truth: Donald Trump.

Yeah, that all makes perfect sense.

It is a disgrace that my full Cabinet is still not in place, the longest such delay in the history of our country. Obstruction by Democrats!

Here is a tweet by Trump on Feb 7th. This statement just states plain wrong facts. The “fake news” is provable.

What is Trump saying here? He either doesn’t know, make stuff up, just to look like he knows what he is talking about, or he is deliberately misleading the people. All these possibilities are frightening, and not acceptable to me.

Up to this point in history I have been confident that our president does not overtly lie to the people.  There have been exceptions, famous ones. Reagan apparently lied during the Iran Contra affair. Nixon lied. Clinton’s “I did not have sex with that woman” is famous. But for the most part, we expected integrity and congruity when the president spoke, and we believed him.

Trump, in comparison, lies about the dumbest things, like the statement above. Why in the world would he do that? He is teaching us that nothing he says can be taken as truth, and therefore taken seriously. How are we supposed to believe him next time – when it’s something much more important?

He didn’t have to tweet this at all. If he had simply not issued that statement, nobody would have complained, and nobody would have missed it. It’s an irrelevant fact. But by making the statement, people like me start picking it up and blogging about it, creating negative attention, publicity, re-blogs, and the effect, overall is negative. Does he not understand it works that way? Or is he too petty to care?

Worse yet, how are foreign diplomats and leaders supposed to trust him when he “makes deals” with them? They know he pretty much always lies.

Of course, I didn’t know Trump. I had thumbed through his Art of the Deal decades ago. I never watched The Apprentice, but caught occasional vignettes flipping through channels. I never cared for the man, but I really didn’t know him.

Now, of course, I have been forced to “get to know him” as much as one can from a distance. And it’s all negative. I would not invite him to a backyard BBQ party in my house. If he wanted to come and visit my company I would tactfully decline. No thanks! If there were a business deal where Trump was involved, I would run the other way.

Trump is 180 degrees opposite to my entire value system. I can’t support him.

Trump lies, systematically, for political gain. He lies to make himself look better, or a victim, like in the above statement.

I watched the 4th debate on Fox Business a few days ago. I remember clearly when Trump said this about meeting Putin:

I got to know him very well because we were both on ’60 Minutes,’ we were stablemates, and we did very well that night.

The two did appear on the same “60 Minutes” episode, which aired on Sept. 27. But journalist Charlie Rose traveled to Moscow for the two-hour interview with Putin, and Trump was interviewed by Scott Pelley in Trump’s Fifth Avenue penthouse in Manhattan.

How does Trump expect us to treat him with any respect, when he makes shit up and lies straight into the camera to 15 million viewers?

Why did he say something happened that clearly didn’t happen? Is he that naïve that he doesn’t think people will check the facts?

Or does he not care enough about what we think?

No matter how to twist and turn this, it shows a deep disrespect to the American people and it insults them.