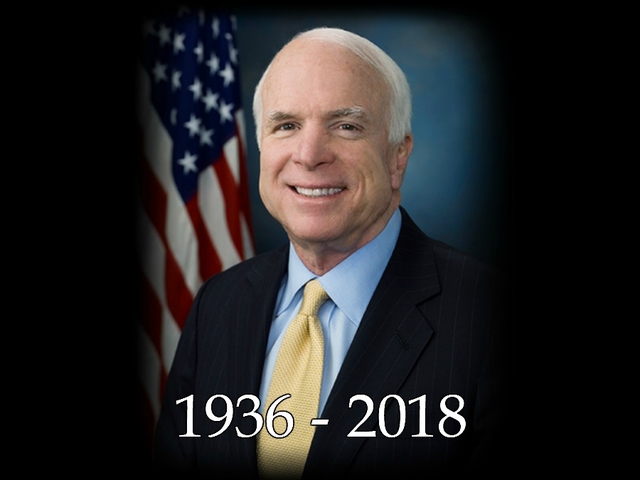 I will miss Senator McCain.

Here are some of my writings about McCain over the years:

Book Review: Faith of my Fathers

An Open Letter I sent to McCain and published here

There is much more in these pages. Simply type in McCain in the Search box above and find out.

I write to you because I truly believe you are one of the most important senators we have in the country right now, and one of the few “grown-ups” in the United States Senate.

I have always been a supporter. I read your book Faith of My Fathers in 2008. Here is my review. I was ready to vote for you, until the day came when you selected Governor Palin as your running mate. That day you lost my vote. If you had chosen pretty much anyone else, you might have very well won that election, and we would have a very different country now. You might have handled the Iraq pullout differently, and there might not be an ISIS now. You might have had to run against this upstart named Barack Obama in 2012, and you might even have won reelection. Then Obama, still a young man at 55 would probably have taken the election of 2016 and we’d have the start of an Obama presidency now.

But my version of alternate history didn’t happen, I voted for Obama, and I enjoyed eight stable years of class and dignity in the White House, no scandals, and an impressive record of things getting done despite rampant obstructionism by the House and Senate, sometimes supported by yourself.

I have respected your actions and decisions over the years. You can find my comments on this blog by searching for your name.

I am writing to you now because I need to call on you to continue to be the voice of reason in the Senate. We have a president who is, in my opinion, off the rails. I am deeply worried about the damage he is doing not only to our country and our people directly, but also to our standing in the world and the general world order. We need a voice of reason, we need common sense, and we need reality in our government. If this administration is indeed tied to Russian influences, we need our elected representatives to hold Donald Trump accountable.

I know about your role in the Sergei Magnitsky case at the State Department as chronicled in Bill Browder’s book Red Notice:

After another fifteen minutes his secretary reappeared. Again, McCain politely waved her off. We repeated this sequence once more, and by the time I was finished, I’d been sitting in McCain’s office for nearly an hour. “Bill, Sergei’s story is shocking, truly terrible. I am so sorry for what happened to him, for you and for everybody else involved.”

I told him about Cardin and McGovern and the early drafts of the Magnitsky Act. Then I said, “Since Senator Cardin is a Democrat, it would be hugely helpful to have an important Republican cosponsor on this bill. I was hoping that this could be you, sir.”

McCain leaned back in his chair, his face thoughtful and serene. “Of course I will do that. It’s the least I can do.” He turned to his aide Chris Brose, who’d been sitting there throughout.

“Chris, please coordinate with Senator Cardin right away to make sure you get me on that bill.”

McCain then turned back to me. “You’ve been a real friend to Sergei. Not many people would do what you’re doing, and I deeply respect that. I will do everything in my power to help you get justice for Sergei. God bless you.”

This story illustrated to me that, of all the politicians in Washington, you are one that understands the political reality of Russia and its objectives. You are also the one, perhaps the only one, who understands what it means to be tortured.

Today I heard you voice your concerns in Munich about President Trump and his continued populist campaign of suppression of the media and general free speech of individuals, and obfuscation of the truth.

We need your voice in Washington and in the United States Senate to keep this administration in check, and to remind your Republican colleagues that it is their responsibility too not to bow to the powers that be and stand up for the integrity of our democracy, the health of our country’s political system and the continued celebration of free speech in defense of science, religion, education and economic health or our people.

You, Senator McCain, are now more important in our government today than you ever were, even in 2008. And I am here to support you.

I respect Senator McCain’s view on torture and his outspoken and candid approach about it.

The book The Faith of My Fathers is John McCain’s biography. I read and reviewed that book over six years ago during McCain’s run for the presidency. In it he describes in detail and at length the suffering he has endured under torture as a prisoner of war in Vietnam. Here is a brief post I wrote about a visit of McCain back to Vietnam.

John McCain has more authority and standing, by far, than any of his colleagues in the U.S. Senate when it comes to rendering judgment about our nation’s endeavors into torture.

Yet there are his fellow-Republican frat boys who are expressing outrage over the report’s release.

Florida Senator Marco Rubio said the Democrats who run the intelligence committee were exposing the CIA’s shocking treatment of detainees purely for “partisan joy.” What a ridiculous comment. This is America. We deserve to know the truth. “Truth” is defined as what really happened, whether it is convenient, pretty or outrageous. Deal with it, Senator Rubio. I want to know and have a right to know what my government is doing in my name, with my money.

Texas Senator Ted Cruz said the “partisan report will endanger lives, drive away our allies – who have never been needed more than now – and undermine the ability of our intelligence officers and soldiers to protect our national security.” Too bad, Senator Cruz. If our nation had stood up for its own values and behaved like we all hypocritically pretend it should, we would not have created this problem for ourselves in the first place. Most of this mess we are in we have created for ourselves in over 50 years of meddling with people we don’t care about and we don’t understand, mostly because we wanted their oil. This is what happens when you stir a hornets nest. And now you’re vilifying a report about something we did. We did it alright. Deal with it, Senator Cruz.

Kentucky Senator Rand Paul said he had “mixed feelings” and was concerned that the “gruesomeness of the details may well inflame people.” Well, if we hadn’t done the gruesome things you’re talking about, we would not be in this situation. But we did.

Ted Cruz was valedictorian in high school and has had a brilliant academic career, including Harvard University. He never served in the military.

Rand Paul has an M.D. degree. He never served in the military.

Overall, there are only 18 senators who have any military service in their background.

And then there is Dick Cheney. Even though he was Secretary of Defense, he never served in the military. He said he “never served” because of deferments to finish a college career that lasted six years rather than four, which he attributed to subpar academic performance and the fact that he had to work to pay for his education. Dick Cheney had asked for and received five deferments, four because he was a student and one for being a new father.

I’ll take Senator McCain’s opinion about torture over that of any other senator, especially that of the frat boys and their cronies.

There are rumors that the USS George H.W. Bush is en route to the Persian Gulf. John McCain, who revealed his immense power of good judgment when he appointed Sarah Palin as a candidate for vice president, seems to want us to send troops back to Iraq. The U.S. is considering sending drones.

Agreed, Iraq is going down – again. It hasn’t been “up” since we destroyed its infrastructure and fragile government in 2003. The destruction and destabilization was the easy part. That took only weeks. Nation building proved impossible. We tried for almost ten years.

The war in Iraq was as futile as the war in Vietnam. Don’t we ever learn?

Yes, Iraq will break up into pieces and the pieces will be medieval theocracies. Women’s rights will vanish. Girls will be denied education. Large sections of the country will live in slavery. That seems to be the Muslim way.

Who are we, to believe we can change that? Sure, drone strikes can hurt some ISIS lunatics, but they will hurt ten times as many innocent civilians as collateral damage.

I do not want another dollar of U.S. money spent on Iraq. The last ten years were full of bad money spent.

McCain just sank another level in my esteem. He openly admits on Fox News:

[T]o be honest with you, Neil, it goes back to there’s a lot of ill will towards Senator Hagel because when he was a Republican, he attacked President Bush mercilessly, at one point said he was the worst president since Herbert Hoover, said that the surge was the worst blunder since the Vietnam War, which is nonsense, and was very anti his own party and people. People don’t forget that. You can disagree, but if you’re disagreeable, then people don’t forget that.

So let’s get this straight. This had nothing to do with Hagel and his capabilities. Republicans just hate it when members of their own party dare to disagree with the party line.

Hagel had the guts to call George W. Bush the worst president since Hoover. Aha, besides more than half of all Americans agreeing with him on that, he told the truth of how he felt. Oh, the crime!

This childish display in the senate was to get even with this — ah, shall I dare call him — maverick?

It’s time McCain fades into the sunset of history.

Senator, I was ready to vote for you in 2008, but with shenanigans like this you are gradually convincing me that I was wrong then.