Here is a section of Trump’s $15 billion “beautiful” border wall after a monsoon flood. Damn those liberal floods!

It’s a good thing that Mexico paid for all this.

Of course, most of the $15 billion didn’t actually go into the wall itself but ended up in the pockets of a band of grifters.

This makes me really proud of my country.

Trump’s tantrums and his playing reality TV with the nation’s economy so he can get $5 billion to build a border wall (which he said Mexico was going to pay for) had me do just a bit of research.

I have always thought that walls don’t work. People tunnel under walls, and they fly over them. As a matter of fact, the majority of undocumented aliens in the United States arrived here by plane, came in through an airport, got their passport stamped, and then overstayed their visa.

Hordes at the border trying to cross are images made up by the Trump administration to scare us. Making immigrants out to be murderers and rapists are scare tactics. Immigrants in general are more productive and contribute more to society and the economy than native-born Americans.

Trump trying to state that “Democrats want open borders” is simply silly. Nobody wants open borders. Border laws must be enforced. Nobody will disagree with you on that. But spending $5 billion on a wall would take years, would be a waste of money, and would not make a difference in the end. So why do it?

Trump is also telling us that immigrants flooding into the United States is a problem for us, and that this is now worse than ever. That, too, is simply not true. 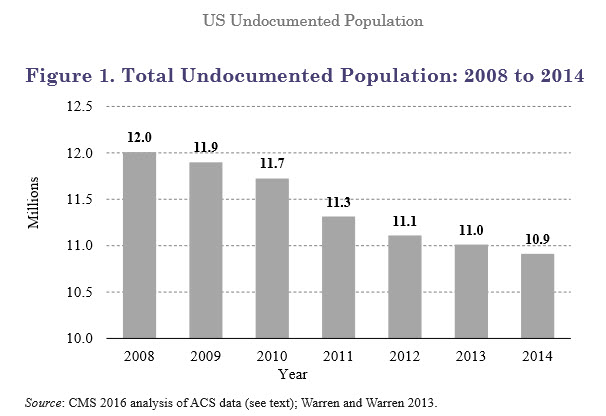 In fact, our undocumented population has dropped during the Obama years and has continued to drop between 2014 and 2018, beyond the chart above.

The methods that are in place are working and have been working. Trump is not doing any miracles. He is simply playing reality TV games with us and making us froth at the mouth, turning us against each other.

Here is a study on illegal immigration which provides some valuable facts:

It took me no more than 20 minutes of casual research to counter most of Trump’s “facts” about the terrible immigration problem we’re having in the south. Does he ever google some of these issues himself? Does he have staff that provides the facts to him if he can’t google? Does anybody advise the man?

The Congress should deny spending a single dollar on a border wall that makes no sense, has no purpose, and does not fix a problem we actually don’t have.

If the president is willing to cripple our economy over this, it’s his own doing and everyone knows it.