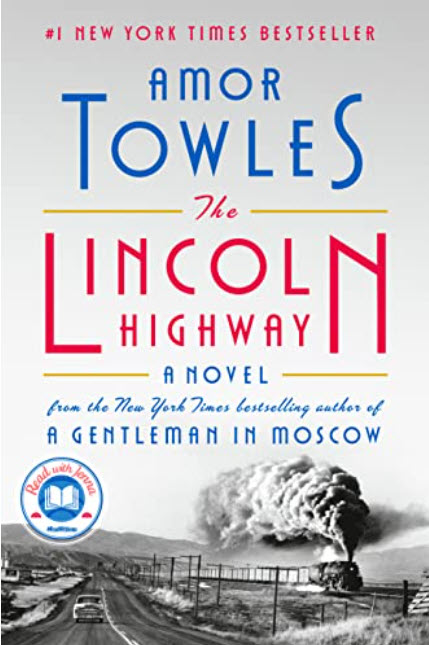 In 1954, Emmett Watson at age 18 is released from a juvenile work farm in Salina, Kansas after serving fifteen months for involuntary manslaughter. His mother had abandoned the family many years before. His father was a failing farmer. He had passed away, and the farm was in foreclosure. Emmett came home to the farm just to pick up his 8-year-old brother Billy, and his baby-blue 1948 Studebaker Land Cruiser, and make his way to California to start a new life.

However, two of his teenage friends from the work farm escaped and ended up joining them. The trip Emmett thought he was taking ended up turning into a completely different direction.

The Lincoln Highway is a novel that is structured unusually. The author took some risks by doing that. For instance, it has 10 chapters and it starts with chapter 10, and then works its way down to 1 as the book progresses. That’s unusual and strange, and if it did anything to help the story, I’d say that’s ok. But I could not find anything that made a difference, so why did he do that?

The chapters are divided into subchapters, each told from the perspective of a different character. Two of the characters, Sally and Duchess, tell the story in the first person from their own perspective. The other chaperts were told in the third person by an outside narrator. I also don’t understand why he did that, since it too didn’t add value to the story. It just made it read “odd.”

Emmett Watson is the main character. He is a person of solid values, honest, responsible and remarkably well organized and calm.

Billy Watson is Emmett’s 8-year-old brother, and probably the smartest of the whole gang.

Duchess is an 18-year-old youth who was abandoned by his father, a washed-out actor and drunk, when he literally sold him out to the authorities for a bauble, a golden watch he stole off a dead man, and had him sent to the juvenile facility when he was 16.

Woolly is a trust fund kid raised in a New York old money family. He has some type of autism and needs strong medication to remain functional.

Sally is the daughter of Emmett’s neighbor, who took care of Billy while Emmett was locked up and his father had passed.

Every one of the characters is well developed, and as the story progresses over a period of just 10 days, we get to know each one of them, and their lives in America in the 1940ies and 1950ies.

Sometimes I had to laugh out loud, and many times I was sad about the depth of the human tragedy and the realization that every human being has a completely different story to tell, a different set of memories, and a different character that developed from a string of endless moments that eventually brings them to this very point in life.

The Lincoln Highway is going to be an American Classic.