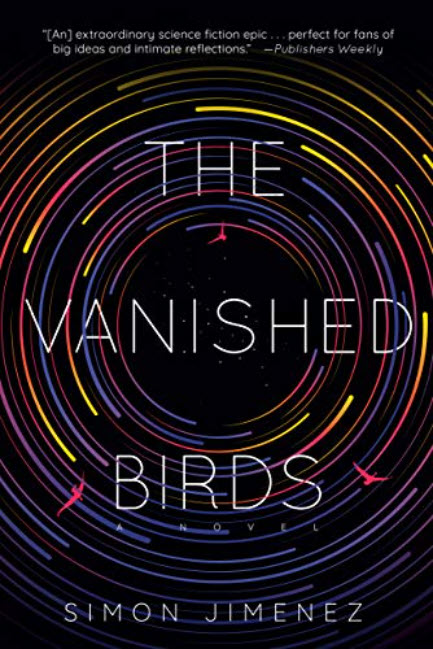 The Vanished Birds is the debut novel of Simon Jimenez. It is a big novel, dealing with humanity and its place in a world where star travel is commonplace, where there are many worlds populated by humans, and where large corporations are the de-facto governments that set all the rules and have ultimate power over the people.

The central character is Nia, a young female captain of a trader star ship with a crew of just a handful of people, a pilot, an engineer, a maintenance tech, a doctor, and someone in charge of cargo. Star ships travel through “folds” which are a sort of hyperspace where time is distorted like it would be at relativistic speeds.

Kaeda, a young boy on an agricultural planet meets Nia for the first time when he is 7 years old. She gives him a flute, which he treasures. The ship only stays for a day to take on cargo, and then leaves, to come back 15 years later, on the next “shipment day.” That’s how long it takes for the round trip. However, on board the ship, only 8 months pass. When Nia returns 8 months later, Kaeda is now 22 and they start a love-affair – at least so Kaeda thinks. Within a few years of Nia’s time, she sees him a few more times as he ages, and Kaeda’s entire live passes. He is an old man the last time she visits.

There is also an Asian engineer named Fumiko, who designs space stations. And there is a mute boy who apparently has  extraordinary powers.

As you might guess, this book is definitely a space opera that speculates on humanity’s distant future and extraordinary technology. It’s a large book with big ideas. Interestingly, there are no intelligent aliens in this world, which seems strange, given the scope of humanity’s reach.

I liked the concepts, I enjoyed reading it, but I would not classify it as a great novel, even through it was nominated for a number of awards.