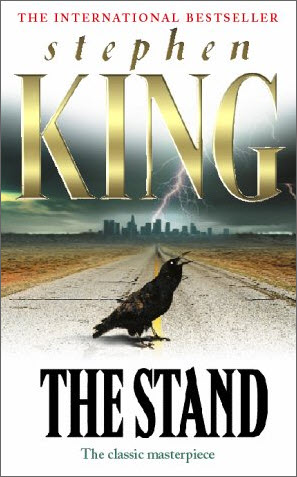 The Stand is about a pandemic that kills almost everyone in the world.

I read this book shortly after it first came out in 1978. Then, in 1990, King reissued the “Complete and Uncut Edition” with extra chapters and some changes. I read it again the early 1990s.

I never did a review of the book. Now might be a great time to do so.

If you’d like to read up on details, check the Wikipedia page for the book here.

A modified strain of the flu (sounds familiar?) accidentally escapes a government lab in Texas. It kills almost everyone it infects. Far less than 1% of the population, for some unfound reason, are immune. This means that in any given city or community, there might be nobody or just one person left. Within just a few weeks, the entire country is a grave yard. Rotting corpses are everywhere, in every house and building. Cars run off the roads litter the highways, usually corpses inside. A few survivors eventually run into each other and small groups band together to eek out a life after “the flu.”

The story follows a group of people who start out in New England and make their way west, collecting straggling survivors as they go. They end up settling in Boulder, Colorado. However, as one might expect, there is also an “evil” group, with its own leader, and they congregate in Las Vegas. The epic struggle between good and evil is carried out by the fragments of humanity.

The Stand is King’s largest book. This is a monster, a work the size of War and Peace. However, it’s also, in my opinion, King’s best work ever, and one of my favorite novels of all time. There are some (very) long stretches of less than exciting mystical sections getting into the supernatural of the bad guys in the second half of the book, which I found tedious. But other than that, it’s riveting reading. King portrays a lot of unique and utterly memorable characters that have stayed with me for a lifetime, including the main characters of Stuart Redman, Frannie Goldsmith, Nick Andros and the ever likeable feeble-minded Tom Cullen, “Laws, Yes!” As usual, King’s characters are deeply developed, very real and convincing. The Stand also introduced me to “Payday” candy bars, which I hadn’t known before. After reading The Stand, discarded Payday candy wrappers always bring back post-apocalyptic visions for me when I randomly encounter them.

I am writing this review as we just received the order by the governor of California to stay at home for the next month to fight the coronavirus pandemic. None of us have ever experienced anything like this before, yet here we are, and the unthinkable has happened.

Well, I have read The Stand before, and I saw how it can end. It’s not pretty.

If you find yourself with some extra time and nothing to read, I highly recommend The Stand.