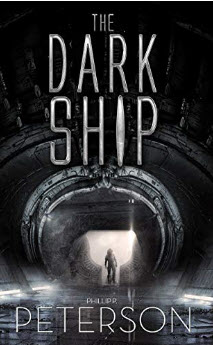 Humanity has created an empire that spans many stars and planets in the nearer galactic neighborhood. Jeff is the executive officer on a warship with a crew of ten. The ships have faster-than-light travel capability. They emerge near their targets at speeds close to the speed of light, unleash their planet-destroying bombs and then, hopefully, speed up again into hyperspace to escape. But the defenses are just as lethal, and Jeff’s ship is the only one of a squadron of five that survives the attack, albeit seriously damaged.

They manage to find a nearby object they think is an asteroid and perform an emergency landing on it. As they approach, they realize it’s not an asteroid, but a giant alien ship with a diameter of 600 miles. Having no choice, they land on it and are admitted inside.

The ship’s artificial intelligence speaks flawless English. It claims it has been intercepting human media transmissions for centuries and has had the opportunity to learn the languages and the cultures. The ship promises to take them home, but the journey would take six months, due to the limitation of the hyperspace travel capabilities of the vessel. The crew takes this opportunity to explore the ship.

It does not take long before they discover the first of them killed in a most gruesome manner. As they search further, they find ancient secrets of horror that threaten not only them, but all mankind.

The Dark Ship is the second book by Phillip Peterson I have read. The other was Flight 39. Peterson writes originally in German and his books are translated. The translations are good and I see no reason why I’d want to read his books in the original German. Peterson knows how to tell a story.

In the case of The Dark Ship, which is much more of a hard science fiction book than Flight 39 was, I was distracted by the fairly lax application of building a reality. Most of the technology applied seemed magic, and I am not talking about the alien technology.

The human space ships seem to travel at relativistic speeds on their missions between hyperspacial jumps, yet there seems to be no effect of time dilation on human society. The fact that a crew would return home decades after it left for a mission is completely ignored. It’s not necessary for the plot in this case, but it just made the story unreal. When the ships travel near planets and stars at speeds approaching the speed of light, there is no mention of how the ships protect themselves from the space dust and other debris that would be intensely thick near a planetary system, making such speeds impractical or impossible.

On a smaller scale, they use seemingly magical military space suits with apparently endless energy supplies. Since the inside of the dark ship is dark everywhere, they rely on their flashlights or headlamps for light, and those, too, seem to be powered with endless power supplies. I could go on and on with examples like this. None of those examples take away from the story line, but for me they made the experience unreal and there is too much deus ex machina going on for it to seem realistic.

The story itself revolves around the crew finding the truth about the alien ship and its ancient mission. To do that, they go on a journey to the interior of the ship. Remember, at a diameter of 600 miles, it’s a 300 mile journey – on foot. That means there are lengthy passages of corridors and more corridors that the crew has to travel down with not much going on to move to plot forward. That makes the book somewhat of a tedious read.

In summary, The Dark Ship is a reasonably entertaining science fiction story, but not one I would want to read again or one that would entice me to read more books by this author.