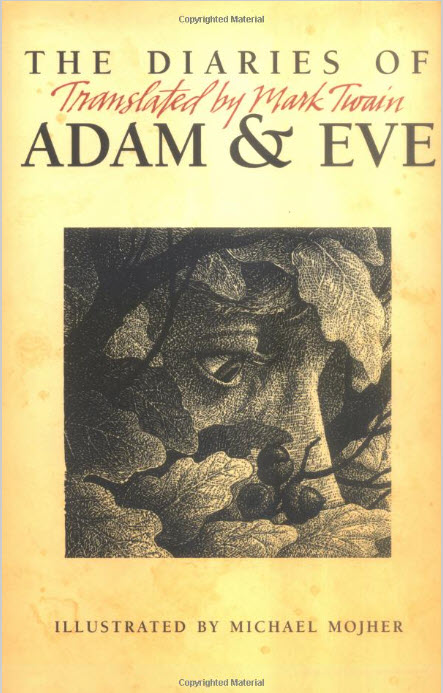 The Diaries of Adam and Eve is a classic by a classic writer. I would never have thought of picking it up had it not been for Wolfgang’s recommendation:

[Do you know the “Diaries of Adam and Eve” by Mark Twain? Glorious! Worldclass! This time no hyperbole!]

So I picked up the book. It’s a very short book and a quick read.

Adam comes back from a tracking trip near Niagara Falls and is baffled by the presence of another creature that suddenly appeared in his life and won’t stop chattering – Eve. Then eventually, we get to read Eve’s point of view, which is entirely different than that from Adam’s. When they get expelled from paradise, they end up in Tonawanda – or something like that. Then the first baby comes along, and Adam thinks it’s a fish at first, then a bear, and it takes him a very long time to figure out Cain is a little human.

This book is a classic, written by a master. I love Mark Twain’s writing. But I could not make sense of The Diaries. I absolutely do not know what to do with it. The story is puerile. Perhaps he wrote it for youth and their amusement. I can’t tell if the whole thing is supposed to be a fable, or sarcasm, a parody, or just pure fun. To me, it’s none of the above. To me, it was just silly.

I have a hard time rating a book by one of America’s great writers poorly, but honestly, I don’t know what to do with The Diaries of Adam and Eve. I can’t, in good conscience, recommend that anyone bother to read it.

3 thoughts on “Book Review: The Diaries of Adam and Eve – by Mark Twain”