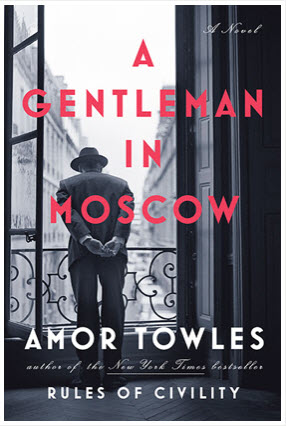 I love the classic Russian writers, Tolstoy (Anna Karenina, War and Peace), Dostoevsky (The Brothers Karamazov) and  Turgenev (Fathers and Sons).  I have read Anna Karenina and Fathers and Sons twice. When a friend recommended I read A Gentleman in Moscow, I immediately picked it up and started reading. I didn’t check any reviews. I didn’t read up on the author. I didn’t check the date of initial publication. Reading A Gentleman in Moscow put me into the world of Tolstoy, and I found myself in Russian drawing rooms and in sleighs in the winter in the Russian countryside.

The story starts in June of 1922 in a Russian court. Count Alexander Ilych Rostov is 33 years old. He had had a life of privilege and education as a Russian nobleman. When the Russian Revolution happened in 1917, he was abroad – and therefore safe. The Soviets didn’t treat nobility with kindness and many of them were executed on the spot. When the Count came back he was promptly tried by a court for some of his liberal writings that were against “the people.” His sentence: Live under house arrest in the Metropol Hotel where he was living at the time. He was not allowed to ever leave the hotel.

The entire book takes place inside the Metropol, the best hotel in Moscow at the time. We follow the Count’s life from his time as a young man through the decades into the mid 1950s. The story brings to life the changes that Russia underwent during the early Soviet years, and then the rule of Stalin and finally Khrushchev.

Towles tells the story in the style of the classic Russian writers and he fooled me. Towles is an American writer with an M.A. in English from Stanford. He has been to Russia a few times, but does not speak the language. He lives in Manhattan and worked most of his life as an investment professional. Starting writing later in life, he published A Gentleman in Moscow in 2016. I knew none of this while I was reading the book.

I enjoyed it very much and it made me want to travel to Moscow and stay at the Metropol in Suite 217. Why? You’re just going to have to read up on that.

One thought on “Book Review: A Gentleman in Moscow – by Amor Towles”