Number 86 on the Random House Board’s list of 100 Greatest Novels is Ragtime. A business associate had given me the book as a present. I finally got finished reading it. 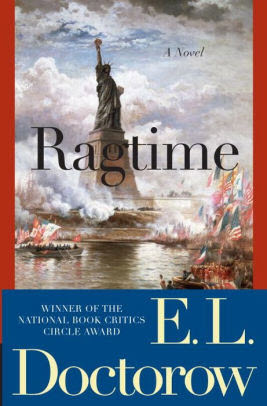 Ragtime tells the story of life in New York City in the years before World War I. It brings together a number of famous contemporaries of the time, including Henry Ford, Houdini, the famous anarchist revolutionary Emma Goldman, J.P. Morgan and many others, and weaves them into the fictional characters of Doctorow that tell a compelling story of racism in America.

The main storyline is about Coalhouse Walker, a black American Ragtime musician who, through talent, hard work and discipline creates a successful life for himself in New York. He can even afford a car, and the drives around in a new shiny black Model T. Most whites cannot afford cars, and when he runs into a roadblock in front of a firehouse, the firemen thugs are harassing him. But Coalhouse Walker does not bend to injustice. He starts a one-man war, and it does not end well for the firemen and the city of New York.

More poignant than the story itself are the graphic description of life of the common man, the black man, and immigrants, at that time in our history. Here is an excerpt on immigration:

Most of the immigrants came from Italy and Eastern Europe. They were taken in launches to Ellis Island. There, in a curiously ornate human warehouse of red brick and gray stone, they were tagged, given showers, and arranged on benches in waiting pens. They were immediately sensitive to the enormous power of the immigration officials. These officials changed names they couldn’t pronounce and tore people from their families, consigning to a return voyage old folks, people with bad eyes, riffraff and also those who looked insolent. Such power was dazzling. The immigrants were reminded of home. They went into the streets and were somehow absorbed in the tenements. They were despised by New Yorkers. They were filthy and illiterate. They stank of fish and garlic. They had running sores. They had no honor and worked for next to nothing. They stole. They drank. They raped their own daughters. They killed each other casually. Among those who despised them the most were the second-generation Irish, whose fathers had been guilty of the same crimes. Irish kids pulled the beards of old Jews and knocked them down. The upended the pushcarts of Italian peddlers.

I have been to Ellis Island. This description does not match the glorious pictures we have in our minds of immigration into the United States over the years. It matches more the descriptions of Trump today, does it not? Ragtime is a novel, of course, and not reality, but it paints a very dark picture of our history that does not match what we like to tell ourselves today about “this great country.”

Life in New York was very different a hundred years ago. I have always loved the city. When I walk through its streets today, as I did 45 years ago when I first came to this country, I always think about its rich history and all the stories that its walls and streets and parks and sidewalks could tell – if they could speak. Here is a particularly graphic paragraph depicting city life not as we think about it:

That evening White went to the opening night of Mamzelle Champagne at the roof garden at Madison Square. This was early in the month of June and by the end of the month a serious heat wave had begun to kill infants all over the slums. The tenements glowed like furnaces and the tenants had no water to drink. The sink at the bottom of the stairs was dry. Fathers raced through the streets looking for ice. Tammany Hall had been destroyed by reformers and the hustlers on the ward still cornered the ice supply and sold little chips of it at exorbitant prices. Pillows were placed on the sidewalks. Families slept on stoops and in doorways. Horses collapsed and died in the streets. The Department of Sanitation sent drays around the city to drag away horses that had died. But it was not an efficient service. Horses exploded in the heat. Their exposed intestines heaved with rats. And up through the slum alleys, through the gray clothes hanging listlessly on lines strung across air shafts, rose the smell of fried fish.

Racism in America needs more coverage. Reading Ragtime today, thinking of our current policies as they relate to immigrants and racial minorities, opens our eyes about our sketchy history and terribly flawed past. Our politicians always talk about:

Give me your tired, your poor, your huddled masses yearning to breathe free. The wretched refuse of your teeming shore.

Oh no, those are illustrious words, but we haven’t really lived up to them, and we’re not living up to them today.

Ragtime is a powerful book, with 320 pages a fairly quick read, that I highly recommend.