Then, against all odds, our next president would be Donald Trump. When he spoke to the United Nations for the second year, he claimed in the opening paragraphs of his address:

The room erupted in giggles and laughter. Trump later claimed that they were not laughing at him, but with him: 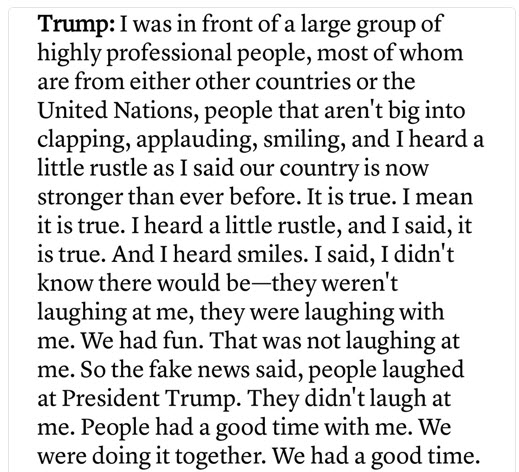 What Trump does not seem to understand is that the way people respond in a Trump rally is not representative of what the country thinks of him, and certainly not the world.

A Trump rally is filled with ardent supporters. We recently found out that the people standing behind him are actually carefully selected and if anyone ever does not react the way Trump would expect they actually remove and replace him.

The United States encompasses only about 5% of the world’s population. Trump’s base that voted for him was 62 million people. Today, his base is generally measured at about 30% of the U.S. electorate. The average IQ of the U.S. electorate is, by definition, average or about 100. I am not suggesting that the average IQ of Trump supporters is any lower, but I am saying it is not likely any higher than 100, either.

At his rallies, Trump is used to people cheering to his every utterance, no matter how false, stupid, purposely misleading, or incendiary. It’s the people that want to hear that stuff that go to his rallies, so of course, his worldview of what people think about him is distorted.

I have traveled out of the country since Trump took office, and I can say with certainty that I have not yet met a SINGLE foreign person who supports Trump or is impressed with him. Most laugh at him and ask me whether I am embarrassed by the buffoon. The vast majority of 95% of the world’s population think he is an embarrassment to our nation.

And make no mistake about this: it was the opposite with Obama, no matter what Trump thinks or thought. The world loved and respected Obama.

Now enter the hall of the United Nations. The people in the audience are highly trained diplomats or even heads of state, and their aides and assistants. They are the best and brightest who rose to the pinnacle of power and influence in their own countries to eventually be ambassadors at the United Nations. I would carefully guess that the average IQ in a United Nations assembly is well over 150, or genius level, which is far beyond Trump, no matter how big he says his brain is.

Unfortunately for Trump, at the United Nations he is definitely not the smartest person in the room, as he thinks he is when he is surrounded by his followers. Whether some of these people he is talking to are from shithole countries (his words) or not, they will far outclass him, both in intellect, in morality, and definitely in education.

6 thoughts on “The World’s Opinion about Trump vs. Obama”