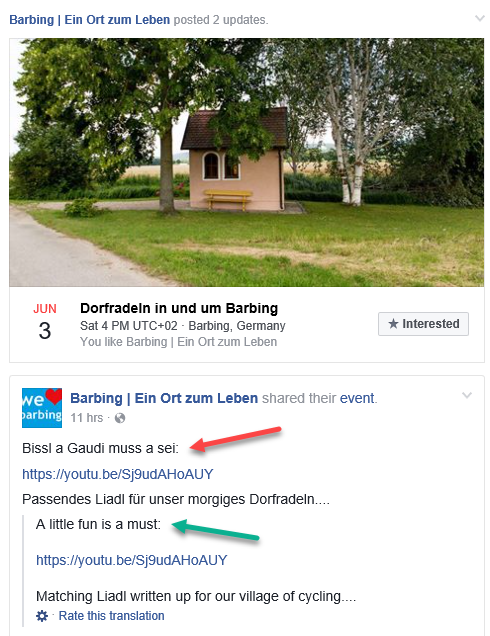 The above post is about an organized bike ride in the communities surrounding the little town of then 200 souls deep in Bavaria where I grew up. For those of you that don’t know about the German language and its “sublanguages” there is this: Bavaria has its down derivative language, where some words and expressions are almost unrecognizable for other Germans. It’s a very strong modification of the language, way beyond the scope of English accents. Entire words change. There is no written form of Bavarian, but poets, musicians, comedians and, of course, Facebook posters, occasionally write down phonetic approximations of the spoken Bavarian and achieve hilarious results.

Even as a Bavarian, we can’t really “read” such approximations without sounding them out loud, and then they make sense. The words themselves just don’t look right.

So here is the sentence in question (red arrow above):

Bissl a Gaudi muss a sei

I could have also said:

A bisserl a Gaudi muas a sai

It would have been just as correct. Not a single word of either sentence above can be found in a German dictionary, except for possibly “muss” in the first variation. For instance, the first “a” stands for the German word “eine” which is a form of the German indefinite article “ein” or the English equivalent of “a” or “an.”

The second “a” in the sentence stands for “auch” meaning “also” in English or possibly just an affirmation word to give the statement weight.

There is no written form of Bavarian, no grammar and no spelling rules. Incidentally, the same is true for Swiss German, a flavor of the language that I, a native Bavarian German, cannot understand, save a few words here and there.

But now to the translation (green arrow above):

A little fun is a must

This is the best literal translation that I could possibly come up with for “bissl a Gaudi muss a sei” and I have no idea how the automatic translator could possibly have come up with this. Is there a Bavarian dictionary with spelling variations that it used? How did it even know it was a branch of German from these six words alone?

I am astonished about the fact that an automated translation engine handled this.

If any readers have examples of such feats in German or other languages, I’d be interested in seeing them.

I thought I knew how translation engines worked. Perhaps I did at one time. I obviously no longer do.