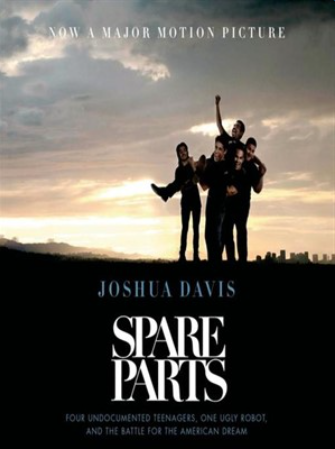 Here is a book I give four stars, because I cannot think of a book more relevant today.

It tells the true story of four undocumented Latino teenagers from Mexico in Carl Hayden Community High School in West Phoenix. In 2004, against all odds, they started a robotics team under the guidance of two extraordinary and inspiring teachers. They built an underwater robot (in the Arizona desert) and took it to the Marine Advanced Technology Education Robotics Competition at the University of California, Santa Barbara. They were up against some of the most renowned engineering schools in the county, like MIT, funded by grants of thousands of dollars. Their robot was built out of spare parts, PVC pipe bought at Home Depot, glue, a briefcase, all stuff they found around the house and the garage. The robot wasn’t pretty. They called it Stinky, because the glue they used stunk.

Against all odds, they won.

Spare Parts tells the story of four kids, Oscar, Cristian, Luis, and Lorenzo, how they came to live in the United States, what brought them to Carl Hayden High School, what motivated them, and what happened to them after they created national headlines with their unexpected underdog success.

Spare Parts tells the story of undocumented aliens in the United States. Each of these kids was as American as you or I. They were brought to the country by their parents when they were infants, toddlers, or elementary school kids. Yes, they were born in Mexico, but they knew no reality than their lives in the barrios of Phoenix. They were Americans and they could not understand why they didn’t get the same opportunities their American-born friends got. They were marked.

Their crime was that their parents brought them into the country by sneaking through a hole in a fence somewhere in the desert. They were guilty, and they were illegal, because their parents committed a crime, the crime of trying to make better lives for themselves and their families.

I am not advocating that it’s right to slip through the fence on the border to improve your lives. We have laws, and they don’t permit this. But I am advocating that it is not right to punish children for the crimes of their parents. Yet, our laws do exactly that.

Read Spare Parts and get a view into the lives of four teenagers, all of whom found themselves in this extraordinary situation, where they were very smart, driven, dedicated, hard-working, willing to serve their country, but not permitted to do so and ostracized and criminalized for it. Read Spare Parts to understand the problem.

Not only did these four teenagers in 2004 create extraordinary success for themselves, they started a movement. Carl Hayden High School has gone on to win many competitions in robotics all over the country since then. More students at the school get engineering scholarships than all sports combined. The interest in engineering has gone through the roof, and the program is now renowned.

Spare Parts refers to Jeff Sessions and Barack Obama. Both have appearances in the book. In 2001, Senator Dick Durbin had introduced legislation to provide a path to citizenship for young immigrants who had been in the United States for at least five years and were attending college. That was the Development, Relief, and Education for Minors Act, the “DREAM Act.” The bill failed to even make it to a vote. In 2010, he tried again, using Oscar Vazquez, one of the four teenagers in Spare Parts, as an example. Senate Republicans commenced a filibuster, blocking the vote.

“This bill is a law that at its fundamental core is a reward for illegal activity.”

The Senate needed 60 votes to break the filibuster. They only got 55.

Spare Parts was written and copyrighted in 2014. Enter Trump in 2017. Jeff Sessions, the Illustrious, is now our Attorney General. Guess what will happen to immigrants now? Donald Trump has signed orders to have Immigrations and Customs Enforcement (ICE) agents round up “illegals” and deport them, sometimes without due process. Trump has blatantly labeled Mexicans rapists and murderers. Trump is fomenting xenophobia. Trump is stirring up vigilantism. Trump is dividing the country.

Reading Spare Parts will give you insight into the plight of illegal immigrant children and their despair about finding their own place in a world where they can’t figure out where they belong. I challenge you to read this book, and then come to me and defend Trump’s current approach.