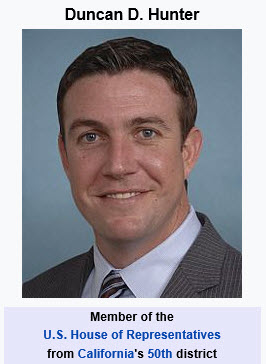 I didn’t vote for Hunter. I didn’t care for his father, either, and I don’t think I ever voted for him. I was in the minority, which I usually am. I always question nepotism.

How is it, that Hillary Clinton, the wife of a former president, is suddenly the most qualified person in the country for the presidency? Might it have had something to do with the name recognition?

How is it, that George W. Bush, one out of more than 300 million eligible Americans, won the election in 2000? Might it have been for the achievement of his father?

Might it be that Duncan Hunter won the election because voters might have confused him with this father, who after all was a household name in North County San Diego, being a congressman for 28 years, from 1981 through 2009? I guess I don’t know if all voters did their research before they voted for young Duncan.

This is the same Duncan Hunter that recently got bad press for ridiculous statements about the border patrol on the Mexican border letting ISIS terrorists into the country.

This is the same Duncan Hunter who just got caught using campaign funds for the following:

This is not all. But you get the idea. When questioned, his spokesman said these expenses were “mistakes.” Sorry.

Seriously? It might not be illegal to use campaign funds for very personal expenses that have nothing to do with the campaign. But mistakes? I can see how you can accidentally charge one such item to the wrong account, by mistake. But how do you accidentally charge a trip to Disneyland, and another to Sea World, to your campaign without knowing it? And how do the accountants that put all this into ledgers just keep doing it without raising the issue?

We have a word for this: Corruption.

Fortunately, I didn’t vote for Hunter, and I didn’t contribute a penny to his campaign. But I am sure many people did. I wonder how they feel about subsidizing the education of the Hunter kids and their family vacations?

This is called “redistribution of wealth,” from ordinary citizens who give money to their congressman for election purposes, to the private slush fund of a corrupt politician who thinks nothing of using other people’s money for personal expenses. And it’s legal. Like the lottery. People volunteer to give their money to these people.

To be fair, Hunter has reimbursed the campaign for about $60,000 in the meantime – after he got caught. He had to mortgage his house to do that. I wonder about the expenses of other members of Congress? Can we see them all?

Duncan Hunter is my representative, but I am not proud of this.

Should we be draining the swamp?