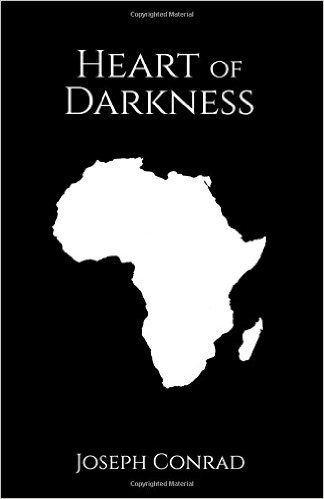 Heart of Darkness, published in 1899, is a novel by Joseph Conrad. It is listed as number 67 in Random House Board’s list of the 100 greatest novels in the English language, which I maintain here. Two friends recently recommended that I read this book. One of them is my literary professor friend in Germany (W.I.). The other is my blogger friend in Australia (V.P.), who was actually inspired to read Heart of Darkness partly by my listing it here on my blog. I might add here that her review of the book is much more inspiring and meaningful than mine – so please check it out.

Charles Marlow is a sailor who tells his story about a steamship trip up the Congo river to transport ivory out of Africa.

Marlow becomes obsessed with the central character of the story, Mr. Kurtz, an ivory trader, who reportedly had disappeared without a trace. People were wondering if he’d gone “native,” or been kidnapped, or had run away with company’s money, or even been killed by the natives.

Eventually Marlow finds Kurtz, and discovers that he has become almost a demigod to the natives. Although he has a fiancé in England, he has taken a native woman as a wife. But he is ill. Marlow takes Kurtz, against his will, with him down the river to bring him back to civilization. But Kurtz does not survive the trip. When Marlow gets home to England, he has to tell the story to Kurtz’ fiancé.

Reading this short book of only 111 pages was a difficult slog. Conrad’s writing is dense and requires reading and re-reading to understand. I kept finding myself drifting in and out of attention.

Due to the stellar reputation of Conrad in general and this novel in particular in the world of literature, I had decided to keep going, for the “experience of it.” I would read a page or two with interest, and sometime re-read some sections, but invariably my attention would drift away and I would find myself reading empty words. In the end, I must admit, I didn’t “get” half the story, I am sure.

The most enjoyable part for me was, ironically, the frame or lead-in story, where Conrad describes Marlow sitting at night with a few friends on a tugboat in England on the Thames. He talks of England, the river, and the immense city of London upstream in descriptive and emotional terms, so the frame really came to light for me and I looked forward to the story. Here is a sample:

Forthwith a change came over the waters, and the serenity became less brilliant but more profound. The old river in its broad reach rested unruffled at the decline of day, after ages of good service done to the race that peopled its banks, spread out in the tranquil dignity of a waterway leading to the uttermost ends of the earth. We looked at the venerable stream not in the vivid flush of a short day that comes and departs for ever, but in the august light of abiding memories. And indeed nothing is easier for a man who has, as the phrase goes, “followed the sea” with reverence and affection, than to evoke the great spirit of the past upon the lower reaches of the Thames. The tidal current runs to and fro in its unceasing service, crowded with memories of men and ships it had borne to the rest of home or to the battles of the sea. It had known and served all the men of whom the nation is proud, from Sir Francis Drake to Sir John Franklin, knights all, titled and untitled— the great knights-errant of the sea. It had borne all the ships whose names are like jewels flashing in the night of time, from the Golden Hind returning with her round flanks full of treasure, to be visited by the Queen’s Highness and thus pass out of the gigantic tale, to the Erebus and Terror, bound on other conquests— and that never returned. It had known the ships and the men. They had sailed from Deptford, from Greenwich, from Erith— the adventurers and the settlers; kings’ ships and the ships of men on ‘Change; captains, admirals, the dark “interlopers” of the Eastern trade, and the commissioned “generals” of East India fleets. Hunters for gold or pursuers of fame, they all had gone out on that stream, bearing the sword, and often the torch, messengers of the might within the land, bearers of a spark from the sacred fire. What greatness had not floated on the ebb of that river into the mystery of an unknown earth! . . . The dreams of men, the seed of commonwealths, the germs of empires.

What is it with me and literature and classic books? I almost always have a hard time reading them, and if I read them, I do not enjoy them. I find that reading should be a pleasure, not work. When it turns into work, my short modern American attention span breaks up and I get lost.

Therefore I cannot rate this highly. I cannot recommend that you, the reader, pick up Heart of Darkness, unless you know for sure what you are getting into.

Now, I have read about 10% into Lord Jim by Conrad, and I really should continue, but the dense writing has my mind drifting, and I am not sure I can continue much longer, particularly with a list of more interesting reading queued up in my library.

10 thoughts on “Book Review: Heart of Darkness – by Joseph Conrad”