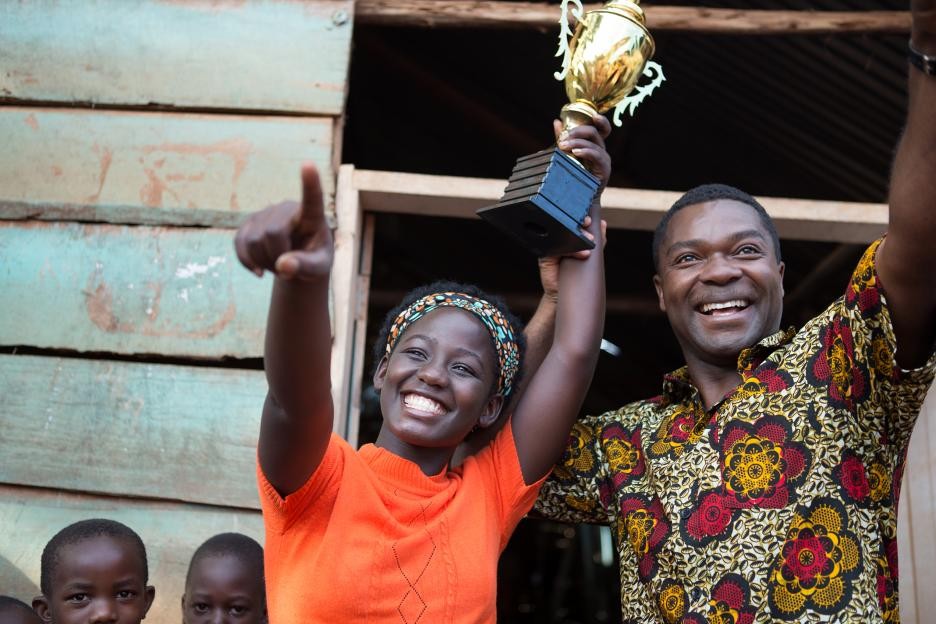 The Queen of Katwe is a true story. In 2007, Phiona Mutesi (Madina Nalwanga) is a young girl in Katwe, a small rural town in Uganda, whose job it is to sell corn in the markets to support her family. Her mother lost her husband and was raising four children on her own. By coincidence, Phiona was introduced to the game of chess. Within a short time it became obvious that she had the talent of a prodigy, and she was lucky enough that her coach, Robert Katende (David Oyelowo) recognized it and dedicated himself to promoting her. Her life changed rapidly as she developed her skills. Would she be able to muster the confidence and strength of character to achieve her dream of becoming an international chess champion?

Queen of Katwe plays mostly in the slums of Uganda. The people live in hovels and piles of rubble. They obtain water from a running spout that comes out of a hill of mud. People are exposed to the weather. It is never clear where the next meal comes from. Nobody is safe. Everyone claws for survival. Yet, the people seem happy.

Sitting in an air-conditioned theater in Southern California, I was as far away as possible from the heat, dust, bugs, sweat, noise, and stink of Africa. Yet, the artist in me was overwhelmed with the colors of the buildings, the clothes, and the spark in the eyes of the people. The story drew me in immediately and never let me go.

I play chess just well enough to know its challenges and the pain and elation it can produce in a person’s heart. There isn’t a villain in this story. The challenges just come from the incredible hardships of everyday life in extreme poverty.

It’s a feel-good story, and there were tears rolling down my cheeks pretty much all through the movie, from the beginning to the very end, when the credits rolled, and the characters stood next to the living characters of the true story of the Queen of Katwe.

It was a four-star experience all the way.