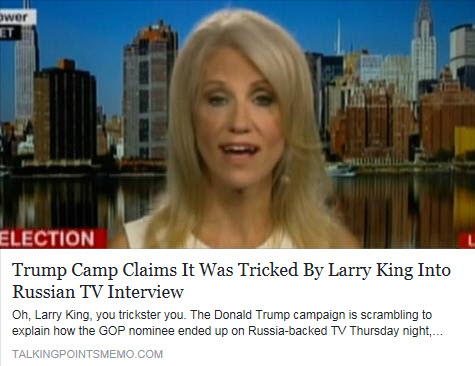 If a friendly but sly guy like Larry King can trick Trump into an interview on Russian TV without Trump figuring out what’s going on, I can’t wait to see what really smart world leaders are going to do tricking Trump.

For instance, the Iranian cabinet has more members with Ph.D. degrees from U.S. universities than Barack Obama’s cabinet does? In fact, Iran has more holders of American Ph.D.s in its presidential cabinet than France, Germany, Italy, Japan, Russia, or Spain—combined. See my post to that effect here. I want to see how good old fox Donald Trump, the self-proclaimed world’s best negotiator, would do in that room. Might they trick him?

Or wait for the Saudi King Salman, a longtime governor of Riyadh province, who is known as a capable administrator and skilled mediator to get a hold of Trump. I see trickery coming from the bad, bad king.

Putin’s IQ has been estimated at 127. Hmm. He is also considered the “richest man in the world” if you consider taking the wealth of a nation by force ownership. But as long as Russia puts up with it, Putin has resources. Might Putin out-trick Trump?

Then there is Netanyahu, the Prime Minister of Israel, who grew up surrounded by books and scholars. Netanyahu left Israel to pursue a bachelor’s degree in architecture and a master’s in business management from MIT. According to Business Insider, Netanyahu’s IQ is an astonishing 180. I doubt the accuracy of this claim since it would make Netanyahu one of the smartest people in the world, beating out most of the “professional high IQ competitors” but even if it’s not 180, it’s probably pretty high and well high enough to play all kinds of tricks with Trump.

For the Trump Campaign to claim that they were “tricked” by Larry King is ludicrous and even scary. I don’t want our president to be tricked that easily, specially an unstable president like Trump would be.

One thought on “Tricking Donald Trump”