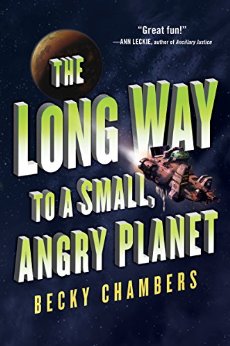 I have heard science fiction writers say that they are writing the books they’d like to read. Well, The Long Way to a Small, Angry Planet is a book I would want to write because I would like to read it.

The debut novel by Becky Chambers is a quirky little road trip story, except the participants are not a motley crew of young adults driving from New York to the American West in a VW van. Rather, a crew of humans and aliens are on a trip in a space ship from the human “area” of the galaxy to the “core” where an obnoxious and dangerous alien race wields power.

The Wayfarer is a tunneling ship – that’s a spaceship designed to punch hyperspace tunnels into space so you can travel thousands of light years in a few hours. How that is done, how the science of it all works, is not explained, and it really does not matter much to advance the story.

When I said it’s a road trip story, I mean that it does not have much of a plot or a conflict. The joy of reading it is simply following the crew from adventure to adventure.

The universe they live in is one where humans are not the primary race. There are three founding races that formed the “Galactic Commons” long before humans even had technology, let alone space travel. One of the races are the Harmagians, a mollusk-like race with tentacles and slimy skin, but no feet, so they have to move around in wheelchair-like carts. Then there are the Aandrisks. They are lizard-like creatures, a bit like velociraptors but with more gentle, human-like faces. They have scales, are cold-blooded, and have claws. They also have to molt. The third funding race are the Aeluons, humanoid creatures, with scales, and no vocal chords, that communicate with the coloring of their skin. They are perceived as beautiful by humans. Humans were only very recently voted in to join the Galactic Commons as a member race. They therefore don’t carry much weight yet.

Rosemary Harper, a human with a secret in her history, is getting away from it all by joining the Wayfarer as a clerk. The captain of the Wayfarer is Ashby, a human. Its pilot is Sissix, an Aandrisk. Its medical officer and cook is Dr. Chef, a Grum. Grums are an almost extinct, ancient race, that have six “handfeet” that they can use interchangeably, multiple throats, and many other very alien features. Then there is Corbin, the ship’s algaeist, a human, and Kizzy and Jenks, the techs, also humans whose job it is keep the ship running. Finally, there is Ohan, the ship’s navigator, a Sianat, which is a feline-like race with fur and four legs. Ohan is extremely reclusive, but a vital member of the crew because due to a strange viral condition is able to visualize hyperspace, a crucial skill if the job of the ship is to “punch holes” into space to create wormholes for other ships to travel through.

How this crew interacts with each other and with other aliens is what the book is mostly about. Other aliens they come across are the Toremi Ka, a very nasty sort with four legs with knees bent the wrong way, or the Quelin, lobster-like creatures with lots of clicking legs and a centaur-like torso and head.

I was fascinated with all the aliens and their interactions, both individually on the ship, and as races with each other, in the Galactic Commons, with all its politics and social structure. But there were some flaws with this book.

As some Amazon reviewers noted, the dialog is sometimes that of high school girls, perhaps because Kizzy, the tech, is a ditsy, albeit brilliant, chick.

My major complaint is that most of the aliens are really humans dressed up as aliens. While their bodies and structures are very different, they pretty much think and feel like humans in other bodies. To me, they are not alien enough.

I also found that the author didn’t describe them well enough. So I could picture them somewhat, but not sufficiently to, say, draw or paint them. I’d have to make a lot of things up. I would say that if you write a book which is centrally focused around aliens interacting, you should do a much better job putting pictures of those aliens into my head. The aliens are all about the same size, approximately human, so they can all interact, sort of like in the bar scenes of the Star Wars movies.

Here is what pushed it over the top, though. Some of the humans and aliens had the hots for each other. There is one central plotline revolving around a sexual relationship between a Human and an Aeluon, and another between a Human and an Aandrisk. That was too much for me. I can’t imagine how one would get sexually attracted to an alien, no matter how humanoid that alien is. And how would that work, claws, tentacles and all, not to speak of sex organs, if there even are any in the aliens. So while it was tastefully handled by the author, it just made it too outlandish and farfetched for me, and I was always reminded that, yes, I was reading a book, and I just had to accept that this was somehow possible.

For me, The Long Way to a Small, Angry Planet was eminently readable, a page-turner even, with some major flaws that I was willing to forgive. I read that Becky Chambers is working on a sequel.

I will read the sequel when it comes out in October.

2 thoughts on “Book Review: The Long Way to a Small, Angry Planet – by Becky Chambers”