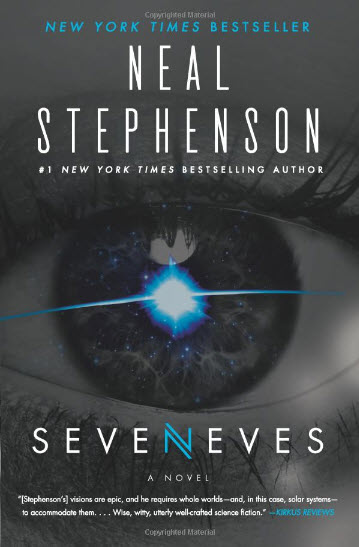 The title SEVENEVES is a palindrome. I didn’t realize that until just now, when I wrote the title here.

Seveneves has a lot of flaws. Yet, it was the best future earth hard science fiction novel I remember ever reading. I was fascinated with its concepts, yet there were many facets about the plot and the story that were outright hokey.

But I loved Seveneves, and I kept turning the pages. This is the first paragraph in the book:

How can one possibly stop reading after that sentence?

The basic premise of the book is this: After the moon blows up, scientists realize that the earth will be bombarded by small and large meteorites from the moon, trillions of them. Meteorites generate a lot of friction heat and they will heat up the planet to a point where it can’t sustain life. To make things worse, the meteor shower will last between 5,000 and 10,000 years. It will start in about two years.

So humanity has two years’ notice to figure out what to do, and the only viable strategy to ensure the future of the human race is to escape into space. Everyone on earth will die in two years, except the lucky few that live in space.

I will stop here, lest I introduce spoilers. As I said, there are a number of things wrong with this novel, that kept bothering me. Some of the basic plot points are just too unreal. I know we haven’t figured out how to live in a completely enclosed system. They tried that on earth with Biosphere at one time, but it failed. The International Space Station (ISS) has been fully enclosed for a couple of decades by now, but it’s constantly being supplied by ships from earth with consumables, and it supports 5 to 10 people at the most. The concept of having the human race survive in space habitats based on 2015 technology for millennia is too farfetched to make sense.

However, I just got over it. I ignored these plot issues, and said to myself: What would happen if humanity could survive in that environment?

Stephenson explores this question to the utmost. He explains many of the technological concepts in great detail. Some negative reviewers complained about this level of  detail and wanted more of a plot and character development. I didn’t. Science fiction, for me, is about marveling what might be, and Seveneves is full of tremendous marveling. I loved the extensive and elaborate descriptions of the space habitats that humanity eventually develops. I loved the implications of using orbital mechanics to facilitate travel. I loved the mega-machines humanity built to live in.

For instance, just to give you one example, there is what they call “the eye.” The eye is a circular structure of about 50 kilometers in diameter. Inside of the circle, picture a “chain” of large habitats, sort of like giant train cars, each car about the size of a city block in length, or half a degree of arc inside the circle. This means there are 720 links in the chain. Each link is a habitat. The chain runs inside the circle so it generates artificial gravity by centrifugal force. You can walk from car to car around the whole 50 kilometer circle, if you wanted to, going from one habitat to the next. To generate one earth-normal gravity (1g), the chain has to move at a speed of about 1,500 meters per second, or about mach 1.5. To put it in terms on modern airliners, which travel at a speed between 800 and 900 meters per second, it means the chain moves at a speed of about 1.6 times as fast as an airliner. Once you are in the chain, you don’t notice it’s moving, and you just experience gravity. But to get on it from the outside of the ring, you basically have to get catapulted onto it. Humans sit down in little “cars” that get accelerated into tubes like bullets until they match the speed of the chain, so they can get off. It’s kind of like some of the rides at Disneyland where you walk up on a moving platform that goes at the same speed of the cars on the ride, so you can get on without the entire ride stopping, except the cars go at a speed of mach 1.5.

I wanted to join that world and live in it. I didn’t want the book to end.

One thought on “Book Review: Seveneves – by Neal Stephenson”