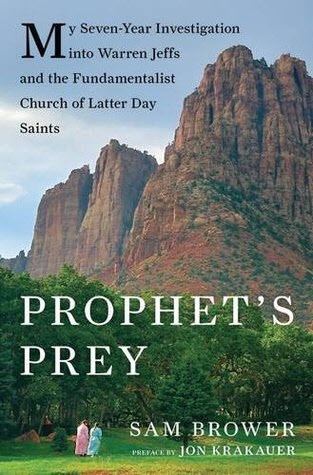 San Brower is a private investigator who took on the Fundamentalist Church of Jesus Christ of Latter Day Saints, or FLDS, as it is commonly referred to, and gradually, over years of painstaking work, exposed it and its leader and “prophet,” Warren Jeffs, as an organized criminal enterprise of massive proportions.

Prophet’s Prey is his chilling exposé of the Fundamentalist Mormon religion and the endless, brutal crimes perpetrated by the “leadership” all in the name of God.

The FLDS is acult with its headquarters in Colorado City, Arizona and Hildale, Utah, two neighboring towns in a remote and isolated strip of the country, bordered by the Grand Canyon to the south and cliffs to the north. Pretty much all the people who live there are part of the cult.

The Mormon religion was founded by Joseph Smith in 1820. In my opinion, Smith was a pedophile and a con man. He started a religion to create a lifestyle for himself. When he eventually was murdered, Brigham Young, another autocratic child abuser and power-grabbing dictator built up the Mormon church. One of the tenets of the religion was polygamy. When the practice started becoming unpopular in the United States about 100 years ago, the “mainstream” Mormons renounced polygamy.

Some of the faithful didn’t like that, and eventually split off to start the FLDS. It exists to this day.

The flock is not allowed to listen to the radio, watch TV or movies, read books, listen to music or get an education. Most children stop school at the elementary level. The people have lived in this environment their entire lives and are completely brainwashed about what the “real world” is like. They think they are God’s chosen people, and their leader is the prophet who speaks God’s will. Everyone is in on it. The doctors and nurses in the hospital. The judges. The police. The mayor. The bishop. The contractors. The health inspectors. The teachers. You can’t escape the reach of the church leadership, and their word, their will, is God’s word and will. People blindly follow orders, whether the orders are legal or not.

When God wants the prophet to be “sealed” to a 12-year-old girl in marriage, then the father of that child has no choice but give up his daughter. Systematic child abuse, rape of boys as young as five to eight years old in the guise of God’s will, and getting underage girls as young as 12 and 13 pregnant by the dozens is apparently commonplace and normal in that environment.

A recently married and newly pregnant Veda Keate, the thirteen-year-old daughter of convicted child molester Allen Keate. Shortly after Allen gave Veda in marriage to Warren, he took an underage bride of his own. He is serving thirty-three years in Huntsville State Prison in Texas. 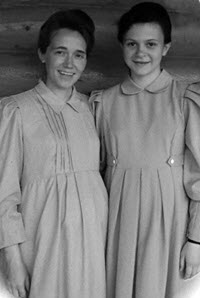 Ora Bonnie Steed posing with underage sister wife Veda Keate. Warren wrote that both conceived their babies during the same “heavenly session” with him. Veda also appeared in a photo in a National Geographic cover story on the FLDS, along with her daughter Serena. The caption in the magazine identified them only as two of the children taken in the raid on the YFZ Ranch.

“Heavenly session” is what the man of God and FLDS leader calls group sex with multiple underage girls at the same time – because somehow that helps the salvation of the world. The entire religion buys into this.

One girl, who eventually escaped, tells her story of growing up in a house with 20 bedrooms and 16 bathrooms with her father, his six wives and 52 children. This seems normal to them. Yet, we all know that this kind of lifestyle is not supportable. Most American’s have trouble supporting a family of four or five people with two incomes. How does a man support six wives and 52 children?

By having five of the wives apply for welfare as single mothers with the State of Arizona or Utah, or both. By sending boys as young as 11 off to work on construction sites as slave laborers. By sucking as much money as possible out of the system, out of our taxes and welfare money. They call it “bleeding the beast” and justify it since they are God’s chosen people.

Prophet’s Prey is a shocking book that provides a view into what almost seems like an alternate universe. It is astonishing that these things can be going on right now, in our time, with very little interference from law enforcement of any kind. After reading Prophet’s Prey, you will never think about the Mormon religion the same way again.

The “mainstream” Mormons are distancing themselves from the Fundamentalists. I don’t buy it. It’s the same messed-up cult, just a different, more drastic flavor of it.

But read about it yourself, and be your own judge. Prophet’s Prey is a must-read book for any educated and responsible American.

Other articles and reviews I wrote related to Mormonism:

Play Review: The Book of Mormon

To Mormon or Not to Mormon

Institutional Lies and Deception of Mormonism