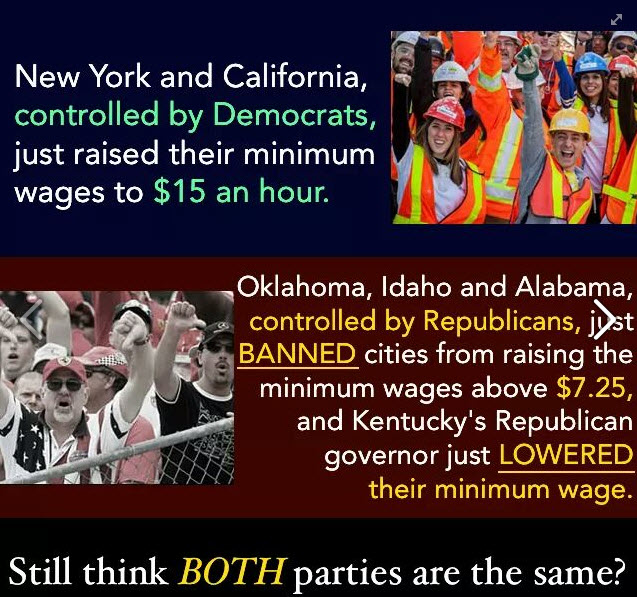 I do not believe that raising the minimum wage solves the problem. I have outlined my thoughts on this subject in many blog entries, including this one. For more, just search “Minimum Wage” in the search box above. There are three main thoughts that this Facebook Meme triggered:

Raising the minimum wage artificially by government action does not work in the end. It tries to solve a problem with a short-term solution. At the end, unforeseen consequences just move the problem around to another area. Let me give you an example in California. We have had a system where low-income families have been receiving assistance for their childcare from the government for decades. A single mom working at Walmart for minimum wage does not make enough money to pay to have her children in childcare while she works. The government has been assisting that mom with subsidized childcare programs. Philosophically you may ask how that is the public’s problem? If mom has children and not enough education to get a job that pays a decent wage, that’s her problem. Why should taxpayers assist her? The answer is a moral one: The government is there to protect the children. Why do we make a child pay for the mistakes of a parent? What fault of the child is it that their parents do not know how to arrange their lives? So we provide quality education by putting them into quality childcare, while the parent finds a way out of this situation. This has been proven overall successful. You may differ with me, but that’s the argument. However, here is how this relates to this minimum wage discussion:

When the minimum wage was raised, and these parents made more money all of a sudden, they no longer qualified for subsidized childcare. So now they have to pay for their own childcare. But their raises were not enough to cover them. So now parents on that fringe had to quit their jobs, stay home with their children, draw on other welfare (food stamps, etc.) while they are not working productively, and the children lost the quality care and education. The children pay. And the public pays – just through a different channel.

States like Idaho, Oklahoma and Alabama, as quoted in the meme, that banned their cities from raising the minimum wage, are acting out of protectionist fear. The governments of these states obviously buy into my argument above that raising the minimum wage does not work in the end. So they don’t do it. However, then they muck with the system in their own way by preventing their cities to act on their own. This is protectionist behavior, and it also will have its own unintended consequences.

The real solution to this is to let the people, the market decide. If the wage that Walmart pays is too little, just DON’T WORK THERE. Find another job that pays more. If Walmart can’t find people willing to work for what they pay, they will raise their pay all on their own. That’s how the market works. This argument is easily made but difficult to put into practice. The problem is that many people who take these jobs simply do not have the education needed for higher-paying-jobs. That may be because their parents could not afford better care and education for them when they were children.

And that brings us right back to education, which starts at birth. The better we educate our people, the better off our society. China has about 60 more school days a year than the U.S. does. More is not always better, but you can see the intent. Early education for our children is paramount to the success of our society in the long run. It’s not about jobs today, it’s about jobs 20 years from now.

And that’s what I have to say about raising the minimum wage today.