In the last few weeks, a set of amazing coincidences came together around me that had me marveling enough to write a post about it. It all starts in 1973, when I was a 16-year-old high school student in Germany. I was in my room and somebody took a photograph of me – probably one of my siblings. In those days, we made photographs into slides. Slides are endemically difficult to thumb through and browse in an album, so they are often forgotten. I had no idea that this picture of me even existed. I have no recollection of it being taken. It was taken in my teenage-decorated room, where I had plastered the walls with my own artwork and knick-knacks. 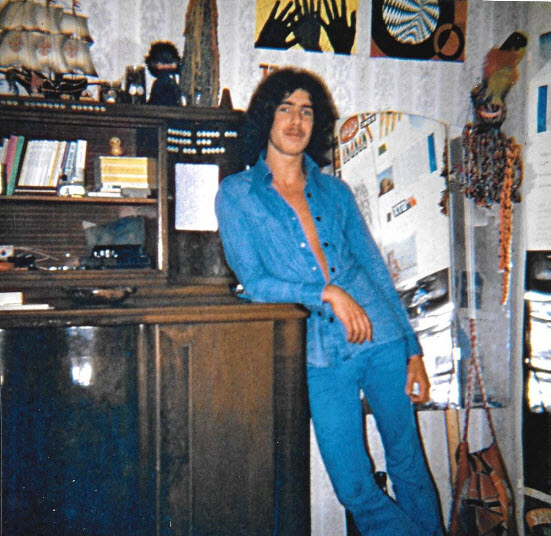 I didn’t have this slide. One of my sisters, when moving house a few months ago in Germany, found it in one of her picture boxes. She, too, did not know how she came to have it, but she thought I’d like it and put it in an envelope and mailed it to me.

It was difficult to see what was on it. Trisha had it developed for me and “cleaned up.” Slides almost 45 years old have spots and marks. One day a few weeks ago she brought it home to me enlarged in print and framed. It was a surprise. Now I could finally look at it.

At this point is must digress for a minute for a backstory. I have written about getting rid of much of my old collection of hardcover books, as I outlined in this post of last winter. I have proceeded with that project, and many of my non-descript books, old paperbacks, outdated non-fiction books, and the like, are now gone. However, I have saved some of the treasures I have – and will always have, and some of those are resting, seemingly forever and untouched, on the shelves around me.

There is an old book of humorous poetry by the German poet Christian Morgenstern, born May 6, 1871 in Munich, and died in 1914 at age 42. The book’s title is Alle Galgenlieder (All Gallows Songs). Morgenstern is a little like a German Shel Silverstein, writing hilarious poems that make fun of human nature and ordinary situations. 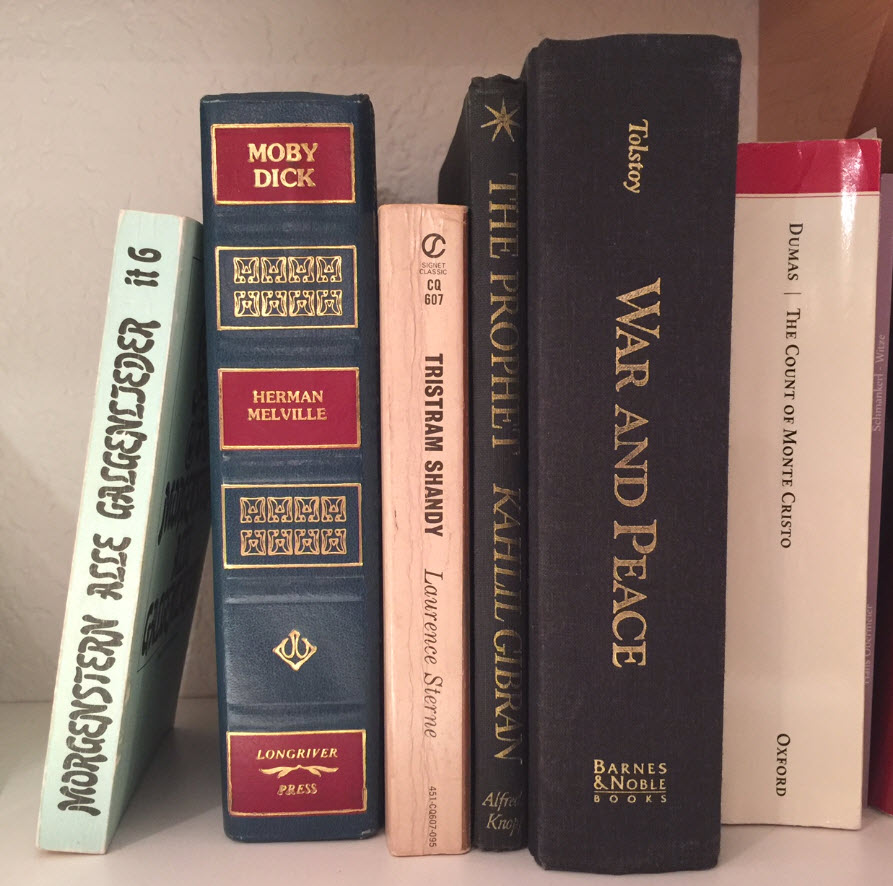 You can see the little blue softcover book Alle Galgenlieder on the left side of this little section of my shelf, not four feet behind my head. The book has been sitting there for the last few years, pretty much untouched and unmoved. It’s in revered company, as you can see, with Moby Dick, Tristram Shandy, The Prophet, War and Peace, and The Count of Monte Cristo.

So where is the coincidence, you ask?

Well, there are very few books that I had in my youth and my childhood that I still have today. I never gave Galgenlieder much thought in the last 40 years, other than thinking of it as an ancient classic, and keeping it around.

Then I looked at the photograph made of the slide, and it hit me:

Here it is, on the shelf next to me, in a photograph I didn’t know even existed. Don’t ask me how I even made that connection. I just looked at the picture, the knick-knacks I had forgotten, and I noticed the book. I turned around in my chair, and here it was. 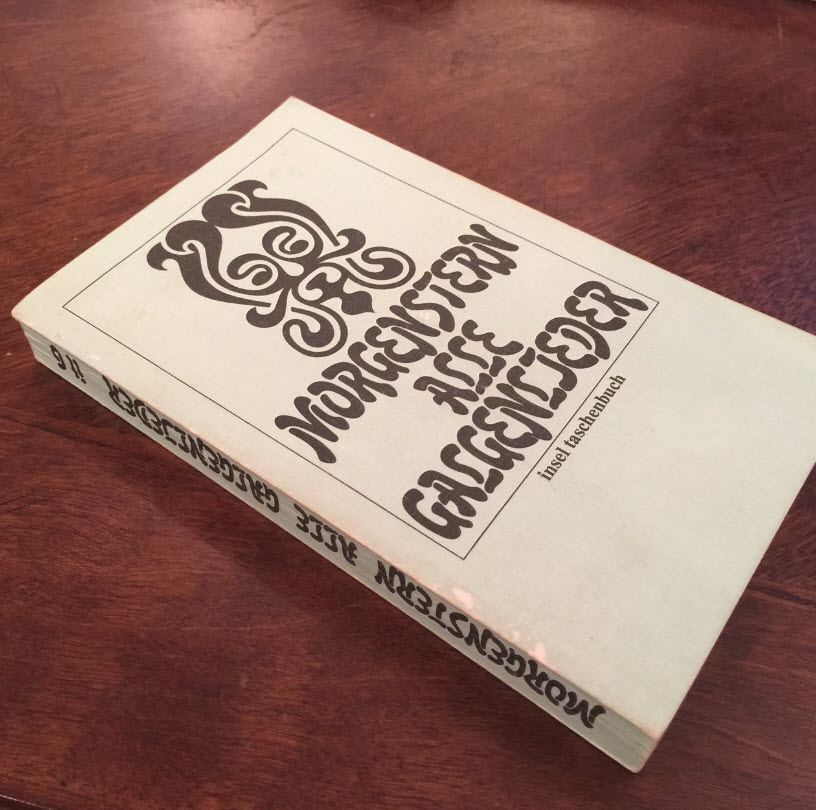 And that, I thought, was pretty cool.

But the story does not end here. Today, I came across a Reddit post about the prefix Hella.

You know, in the series of Mega, Giga, Tera, and so on, Hella is for one octillion.  So I clicked on the link and came to this Wikipedia article, where the origins of some of the other prefixes are discussed. I scrolled around and got to the now ubiquitous Giga.

In the age of the iPhone and iPad, every grandmother knows what a Gig is – or at least acts like she does. Then I read about the origin of the prefix Giga, and was thunderstruck:

The prefix giga is usually pronounced /ˈɡɪɡə/ but sometimes /ˈdʒɪɡə/. According to the American writer Kevin Self, in the 1920s a German committee member of the International Electrotechnical Commission proposed giga as a prefix for 109, drawing on a verse (evidently “Anto-logie”) by the humorous poet Christian Morgenstern that appeared in the third (1908) edition of Galgenlieder (Gallows Songs).[6][7]

This suggests a hard German g was originally intended as the pronunciation. Self was unable to ascertain when the /dʒ/ (soft g) pronunciation was accepted, but as of 1995 current practice had returned to /ɡ/ (hard g).[8] [9]

So this claimed that Morgenstern first used the word Gig or Giga. Could that be true?

So I turned around, reached for my trusty Galgenlieder behind me, checked the index for Anto-Logie, and promptly found it on page 76: 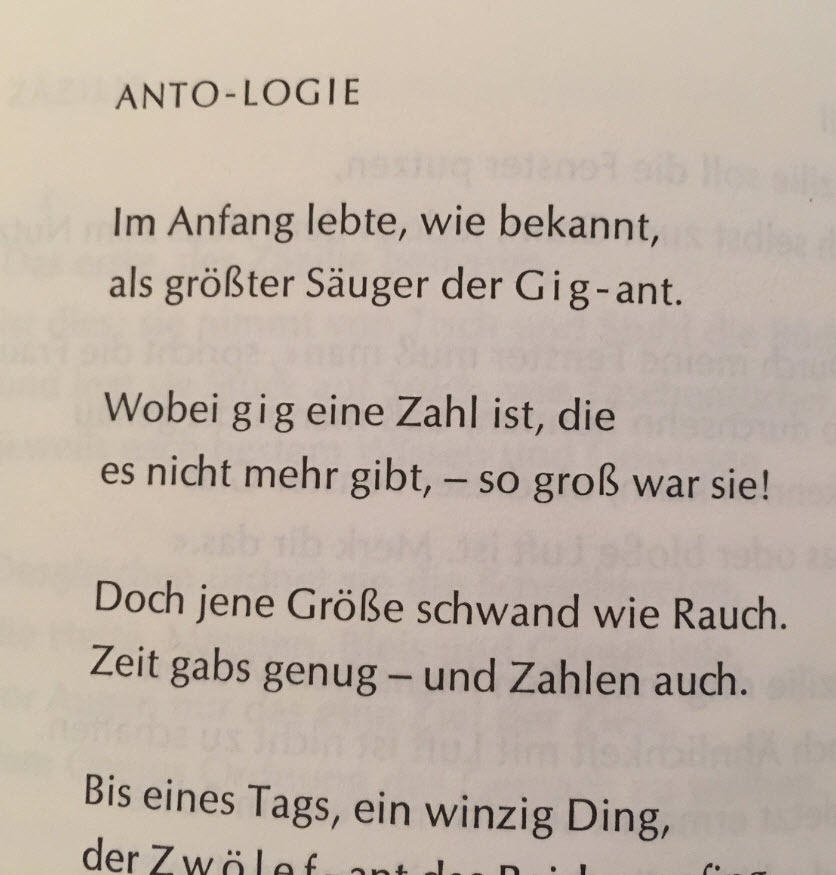 Sure enough. Here it is.

A friend (KJ) emailed me an excellent translation by Max Knight:

Of yore, on earth was dominant

the biggest mammal: the Gig-ant.

it’s been extinct for ages past.)

Time did abound, and numbers too,

until one day a tiny thing,

the Tweleph-ant, was chosen king.

Where is he now? Where is his throne?

In the museum pales his bone.

the Eleph-ant us in his place,

but, woe, that shooting anthropoid

him ere he could degenerate,

by stages, to an Ten-ant’s state.

And there it is, the story of coincidences:

Through this unlikely coincidence I learned the origin of Giga

From an old 19th century book by a German poet

That I didn’t realize I had near me

That my sister found when moving

In which I recognized a book

That I didn’t know I still had.

One thought on “Coincidences around Gigs and Christian Morgenstern”