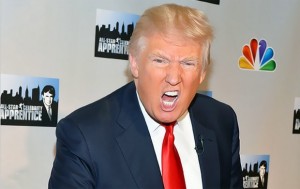 In the last few GOP debates, we saw many examples of the three “leading” candidates interrupting each other and yelling over each other and over the moderators. Only Kasich was reserved and thoughtful. The other three were acting like desperate fools in a personal pissing contest.

Kasich was the only candidate that possibly looked “presidential” on that stage. I was embarrassed for the others.

More alarmingly, there are myriads of videos of Trump on the podium of his rallies, screaming at the top of his lungs, and repeating several times: “GET HIM OUT OF HERE!”

He is egging on the audience for violence. He tells them if they beat up the protestors he will defend them in court. He talks about bringing torture back to be used against our enemies (while he obviously doesn’t understand that our use of torture and our invading other nations is breeding those enemies in the first place). He suppresses freedom of speech of protestors with force and violence.

I have never, in two years of campaigning and seven years in office, seen President Obama scream like Trump does every day. I have never seen Obama incite violence. I have never seen an Obama rally where protesters rise against him. I only remember once when a congressman heckled him during the State of the Union Address and said “You Lie!” And even that he handled with grace.

What do we think this man would do after we installed him in the White House? What do you think will happen to members of the media, who get beaten up now openly in rallies, after Trump were in power? What do you think Trump would do to people who do not agree with him, in our own country and system? Remember the threat on Paul Ryan, the Speaker of the House?

This reminds me of a quote by Martin Niemöller, a Nazi dissident:

Should I start all over again?

First they came for the journalists, and I did not speak out – because I was not a journalist.

Then they came for the protestors at rallies, and I did not speak out – because I was not a protestor.

Then they came for the Muslims, the Jews, the Hindus, the Mexicans, and anyone speaking a foreign language…

I am embarrassed by the behavior of our GOP presidential candidates. Is this the best our country can produce? Who is the last decent, thoughtful, powerful and impressive Republican candidate I can even think of in this field of clowns?

Those were the days.

3 thoughts on “Trump the Screaming Thug”