When I read this article I could not help seeing some of the comments below: 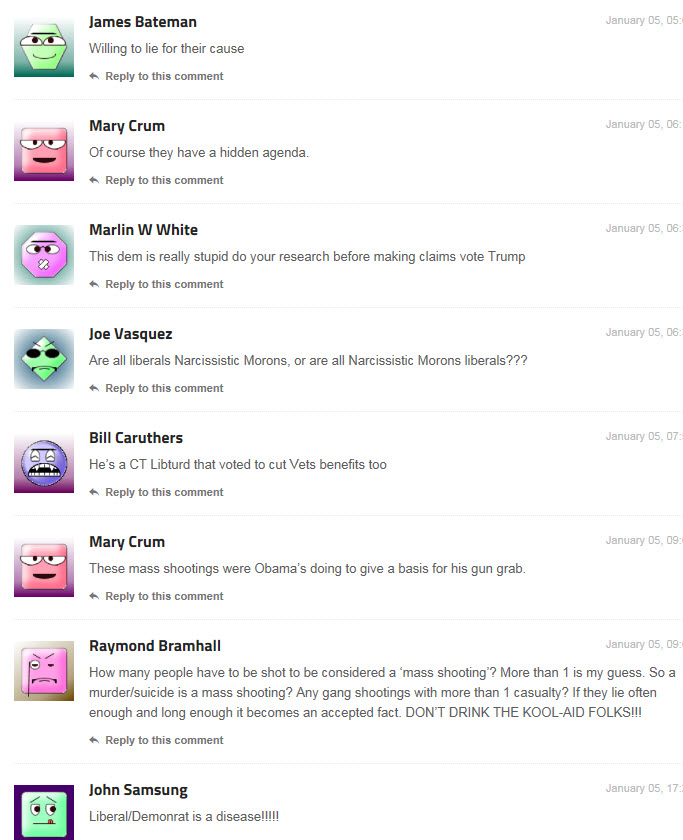 Marlin W White needs some lessons in sentence structure and punctuation, but I get his point. He is a Trump supporter: “This dem is really stupid do your research before making claims vote Trump.” This really speaks volumes to me.

Mary Crum says that Obama did those shootings to give a basis for his gun grab? What gun has Obama grabbed yet?

Raymond Bramhall argued that a murder suicide is not a mass shooting. Ok. Let’s take out all the murder suicides, and we’re left with four? Really?

Do you have to be liberal to be concerned about this amount of people shooting others – or themselves? Can you not be conservative like I am – in many regards – and still not like this amount of shooting?

Clearly, most of these comments are emotional outcries and most don’t make sense. To me, these sentiments are batshit scary.

To get some real data, not Facebook meme hype, I did a little searching and came up with this website that collects data about mass shootings. This may be an evil liberal site that is self serving, but in the end, it shows by date, by incident, by state, by city, by exact address, how many people were killed and how many wounded. You can call it what you want, but in the end, more than one person got killed or wounded at every one of these incidents, and some of them were probably murder suicides.

I tallied them up and there were 330 incidents, with 367 people killed and 1317 wounded. That seems like a lot. Definitely more than four, as the Truth and Action site states.

Moronic? Narcissistic? Stupid? Lie? Hidden Agenda? — Really? I see 367 dead and 1317 wounded in shootings where more than one was hurt at a time. Pretty basic.

I then checked how many of those shootings were by Muslim terrorists, and found two. Yes – two.

We have focused on those two in the national spotlight more than we have on the other 328 combined. Yes, 16 of the deaths and 19 of the wounded were in San Bernardino alone. It was the largest in 2015. The second largest was the biker shootout in Waco, Texas on May 17, 2015.

Our focus on the Muslim jihad crime far outweighs the attention on all the other crimes listed. We’re willing to give up our freedom and liberties to try to stop some of those jihadist crimes. But we’re not willing to seriously deal with the source of the 328 others.

Furthermore, the famed iPhone of the killer has recently drawn national attention by actions of the FBI against Apple. The government wants to force Apple to adulterate its operating system, opening it up to backdoor access, and making all 700 million iPhones worldwide vulnerable to hackers – all because there “might be” intelligence information about jihadists in the United States on that phone – all after the FBI botched the one chance it had to recover the data before it called Apple for help.

I also find it very interesting that one Muslim hate shooting has our government hold nothing back, going after the largest tech company in the world, willing to go to the Supreme Court – just to modify and regulate the iPhone, a computer. This all happened within just a couple of months of the incident.

On the other side, millions of concerned Americans have been trying to go after the killing devices (the guns) themselves for decades, yet the government does not even take action. Is this backwards?

Everyone seems to be all focused on the Founding Fathers’ intention when they crafted the Second Amendment. It states this:

I think both bases are well covered. The second one is no longer important. I don’t think we’ll have any more British or Spanish gunships pulling into New York or Boston harbor. The first one is well covered. There haven’t been any slaves in some time, Native American’s haven’t been scalping too many of us, and I am not worried about thieves and bandits when I travel the highways – unless I go through Waco, Texas.

After all this, I am not about to call to “trample on the Constitution.”

I am proposing a 28th Amendment: to make it illegal for government to strongarm technology companies into adulterating their products by disallowing strong encryption or by dictating backdoors into computers. We really need the 28th Amendment.

Enough trampling for a day.

2 thoughts on “Controversy Over Mass Shooting Statistics for 2015”