— one that returns after death or a long absence 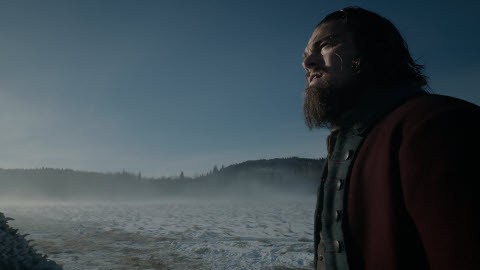 Watching The Revenant was exhausting. 2 hours and 36 minutes long, it didn’t let go. Not for a minute.

It took me into the icy winter of Montana. Inspired by true events that happened to the legendary explorer Hugh Glass in 1823 in Montana and South Dakota, the movie tells a story of betrayal and redemption. Glass (Leonardo DiCaprio) is a member of a hunting and trapping party in the wild west. After they are raided by hostile Indians and decimated, Glass gets surprised and attacked by a female grizzly who is protecting her cubs. Glass was mauled so badly that his friends did not expect him to survive. Three men, including Glass’ half Indian son, stay behind with him until he dies, while the rest of the party moves on. John Fitzgerald (Tom Hardy), the most experienced frontiersman, decides to abandon Glass. Against unimaginable odds, Glass survives, and starts his journey of 200 miles through the winter wilderness of Montana, alone, without weapons, only able to crawl, his body covered with festering wounds, driven by sheer willpower and relentless pursuit of redemption.

I have hiked mountains in Montana with a bear can in my pack in case I encountered a grizzly. After watching the grizzly attack in The Revenant, I know just how utterly helpless a modern human would be if attacked by a grizzly. The speed, size and ferocity of an angry bear is unmatched by any other predator in the world. A hardened frontiersman like Glass with a rifle in hand pointed at the bear could do nothing to protect himself. My puny bear spray can in my pack would be totally useless. Oh my, will I ever again have the courage to hike in the great north?

The bear attack in this movie alone is worth watching. Mind you, it’s very challenging and difficult, but it’s the most realistic and graphic animal attack I have ever seen in a movie. It’s so realistic, I felt I was there, I was groaning, gasping, and – I admit – I looked away a few times.

The scenery of the mountains in Montana (actually filmed in Canada and then in Southern Argentina, when they ran out of winter in the north) was breathtaking. As a lover of the outdoors, I enjoyed watching the winter wilderness. This is a movie for “winter people.” The movie constantly shoves the cold and unforgiving brutality of nature into our faces.

It also brings out the battles between the American and French trappers and the various Indian bands. Why did the Indians go after the whites so ferociously? Why did the whites kill, maim, and rape the Indians. Why did one side cheat and steal from the other? The Revenant gives an unadulterated look into a grim and violent period of American history, not so far in the past at all.

Leonardo DiCaprio did the job of his lifetime here. This will get him his Oscar. He not only carries the movie, DiCaprio is the movie. From the first minute, to the last, he overpowers us with the sheer pain, wildness, and ferocious will of the character he plays. It does not seem like he acts. We are watching Hugh Glass, being crushed by his environment, over, and over, and over again – only to stand up and rise next. DiCaprio takes us into the wilderness with him, and into the soul of a frontiersman and trapper, and the father of an Indian child, and the husband of an Indian woman.

The Revenant is not a movie. It’s an experience. And it is hard work to watch.