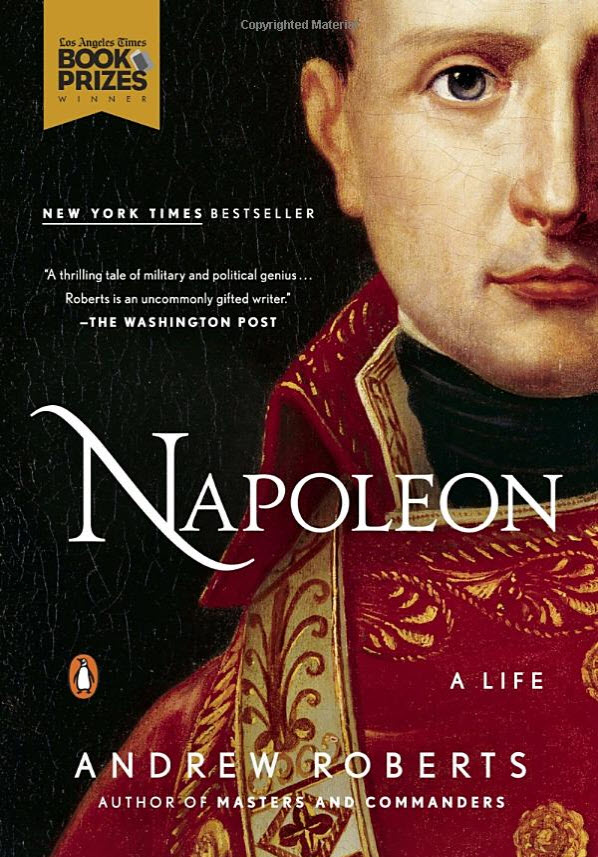 I knew very little about Napoleon. I had never read about that period of European history. Yet, now, after reading this masterful biography of over 800 pages, I feel truly enriched.

Napoleon was born in Corsica in 1769 to an average family. His father died when he was very young. He was interested in history and was a voracious reader, even as a boy. His heroes were Alexander the Great and Julius Caesar. As a teenager, he enrolled in a military school and eventually received a commission as a lieutenant in the French artillery. Through extremely hard work, relentless ambition, charm and charisma, he worked through the ranks and became a general at age 27. Soon he was the most popular general in the French military. Due to the power vacuum and incompetence of the government after the French Revolution, he managed a military coup before we was 30 years old, ending up as the head of government as a First Consul. A few years later he crowned himself Emperor.

Now, that was a self-made man if there has ever been one.

There may be more books written about Napoleon than any other figure in history. Roberts’ book presents new material based on the 33,000 letters Napoleon wrote over the course of his life, sometimes as many as 30 a day. But I am not a historian, so to me, this biography was a first introduction to a great man of history.

Well – great in some measures – and frightening in others. Napoleon was a killing machine. During the 15 years he was in power, he conscripted millions of young French men away from their farms, shops, factories and schools into the military, just to lead them into endless battles to be brutally killed. Many battles “only” had 4,000 killed or wounded. Others 30,000 or more. Of the 600,000 men he took into Russia, eventually reaching Moscow, less than 50,000 or so came back home. Most of the men died of Typhus and other diseases, fatigue, starvation, and on the way home in the winter, the brutal, relentless cold of the Russian winter.

We know about “great battles” in history, names like Austerlitz and Waterloo. What actually is “great” about battles, places where tens of thousands of men lost their lives because of the megalomania of their leaders, all monarchs with grandiose egos and destiny on their minds? Was the greatness in the interest of the people?

Reading about one of the greatest statesmen and leaders in history, I found that there are many lessons to be learned for success and leadership, even now, almost 200 years after his death. Whether I agree with Napoleon’s tactics or not, he was definitely a remarkable man, and one worth reading a huge and long book about. Napoleon set out to be listed among the greats, and nobody will doubt that he achieved just that. Alexander the Great, Julius Caesar, George Washington, Napoleon, they go together.

Roberts did a great job telling the story of Napoleon, the man, and his life, from the beginning to his last days.

As I worked through this biography, I realized that War and Peace by Leo Tolstoy, widely acclaimed as the greatest novel of all time, actually plays during the Napoleonic Wars from 1805 to 1810. So I picked up War and Peace, and I am ready to embark now on this huge novel, with keen interest kindled by Napoleon: a Life.