The last time an aspiring world leader talked about banning all members of a religion it didn’t end well.

In the 1920s, a young zealot in Munich started giving fiery speeches to small groups of supporters at first, where he blamed the blight of the German people on the Jews. Slowly, one speech at a time, he added more and more supporters and put momentum behind the political party he cofounded. Over the course of about 10 years, this little upstart politician clawed his way into political leadership in Germany, when, through a series of unconstitutional maneuvers he was named chancellor in January 1933.

Within weeks, he took control of the police and then the military, abolished all other parties, and designated the members of the Jewish religion as the official state villains that had to be eradicated. It started slowly at first, but as it happened more and more often, more and more of the people believed it was right.

The zealot was Adolf Hitler. He had hijacked an entire country. We know how this ended.

Banning millions of people based on their religion has been tried before through the millennia, and it has never ended well. It has never been successful. And it has often resulted in the ruin of the nation that tried it. 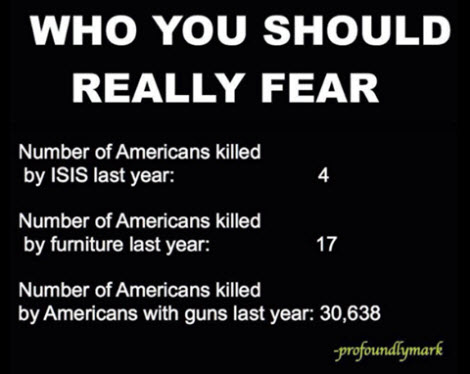 Putting indiscriminate blame for the atrocities of a very few is fear mongering. Trump is a demagogue. The statistic above may be exaggerated. I am not sure how many Americans were killed by ISIS last year. We may have to add the 14 victims in San Bernardino to the 4 listed here. So now, finally, there are more Americans killed by ISIS than by furniture.

Why don’t we ban all people with guns from America. They’re killing a lot more than ISIS do, and most of them by accident. We don’t do that because it’s ludicrous and insane.

But when our demagogue tells us how smart he is, and how thousands of Muslims celebrated when the towers fell on 9/11, and how all this misery we’re in is the fault of the Muslims, if he just tells us that over and over again, we might just be stupid enough to vote him into office.

May Allah help us then.

5 thoughts on “Trump Wants to Ban All Muslims”